In the words of Herman Melville in Moby-Dick, 'Oh, Time, Strength, Cash, and Patience!', enough of each to visit all the top bird and other wildlife destinations on Earth. Alas, there exists strength and patience but neither time nor cash permit such indulgence. So, in order to make sure the trips that can be made are the best possible I have been researching the 200 or so Destinations, 100 best Birds and 100 best other Wildlife on this website since the 1980s, both at home in Britain and abroad, on travels to all seven continents, some several times, mostly on 'Wheatley's Waste Not Want Not Tours'. However, even the results of this research, published and updated regularly on this website, are, again in the words of Melville, 'but a draught - nay, but the draught of a draught'.

Still going after all these years and still seeing some fantastic birds, like this Wilson's Bird-of-paradise watched for hours at its display court on Waigeo, an island off West Papua. My old birding companion Nick Cobb, also known as Chief, took the image, from the palm-frond hide.

It is important to remember that the more preparation you make before setting off on a 'birding trip' the more exciting, enjoyable and successful it is likely to be. However, while I hope to help answer some of the questions you may ask yourself before heading off, for the first or fortieth time, I cannot, and do not wish to, direct you to every bird and animal in the minutest detail. This website is not an up-to-the-minute trip report - I urge you to seek the many excellent trip reports out via the websites listed on the Trip Reports page, and to write up your own experiences and share them - so some sites mentioned on this website will have changed when you arrive at your destination, some may not even be there at all, and new ones may have opened up. Fortunately some uncertainty is what makes travelling, especially in search of birds and other wildlife, so much more exciting. It would be a poor pastime if every bird and animal was lined up on an X on a map, and while some are teed up on this website I hope there are not many and that the information presented is enough to be a guiding light to the best places on the planet for birds and other wildlife, places where, unlike many others, birds and other wildlife still thrive. I hope there is enough of the right type of information to encourage you to visit at least some of the destinations, for, in turn, your visits may help to ensure that these destinations are conserved, for the wildlife they support, and for future generations to enjoy. I have long been a supporter of ecotourism because I believe that landowners, hopefully the local community, encouraged by visiting birders, other wildlife enthusiasts and so on, may decide not to sell, say an area forest, to, say a multinational intent on clearing the forest to make way for a palm oil plantation, for short-term gain, and keep and manage that forest for the long-term instead if they can see it helping to support their community for generation after generation. Ecotourism is certainly playing a major part in protecting what is left.

The planet is suffering badly from too many people; our need for water and shelter, the intensive farming needed to feed us, the ransacking of resources to provide for the insatiable appetite for the latest technology, and the pollution we create. The quantity of life is increasing rapidly while the quality of life plummets. However, despite our selfish and stupid degradation and destruction of the planet which is our home, amidst the carnage, some places have, so far, somehow, avoided the worst we can do, and are still full of birds and other wildlife, so my research is ongoing. Since 2001 when I wrote the last of the 'Where to watch' books listed below I have been to the sparsely populated, extensive forests and grasslands of Gabon where I watched beautiful Rosy Bee-eaters at one of their colonies; the mountains of Mexico where I heard the murmur of millions of Monarch butterfly wings and saw multicoloured warblers galore; Uganda, where two separate, truly wonderful, hours were spent with Chimpanzees and Gorillas; across the Southern Ocean to the King Penguin rookeries and synchronised flying displays of Light-mantled Albatrosses on South Georgia, and on to awesome Antarctica; Papua New Guinea, to watch some aptly-named birds-of-paradise, the most fantastic living things on Earth; and West Papua, for more birds-of-paradise including Western Parotia, Magnificent Bird-of-paradise and Wilson's Bird-of-paradise displaying at their courts. We live on a beautiful planet. Long may it be so. 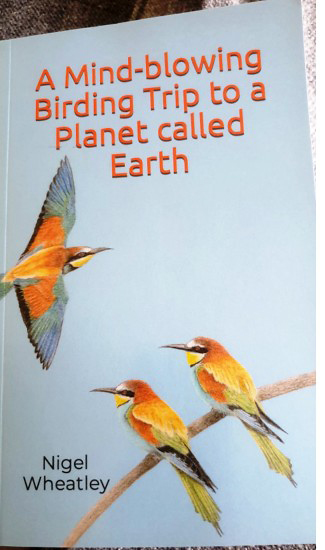 I am also the author of A Mind-blowing Birding Trip to a Planet called Earth which was published in September 2021. Here is the blurb ...

At the ages of 19, 25 and so on Nigel Wheatley dropped out of the rat race and hit the road, in search of his dream birds and the wild places they live in. Over the course of 45 years he has ended up on all seven continents, some several times. 'A Mind-blowing Birding Trip ...' combines a passionate celebration of the beauty of planet Earth with wild adventures and misadventures shared with friends. It is an exciting, exuberant, incident-packed tale of depths of despair and heights of euphoria that flows like a shearwater over the sea, while also attempting to capture what birding is all about.

Here it is, the book I’ve been on about for years, my attempt to capture what birding, and life, is all about, all 800 pages of it. From the patch to Papua New Guinea, via twitching in Britain in the 80s, Wallcreepers in the Pyrenees, looking for Snow Leopards in the Karakoram Mountains of Pakistan, Kenya, Borneo, cotingas galore in Venezuela, Diademed Plover, the Hong Kong shorebird show, Australia, Egyptian Plovers, Bee Hummingbirds, Marvellous Spatuletails, Mountain Gorillas, Shoebill, the Serengeti, snorkelling over coral reefs, South Georgia, Antarctica and some great local patches, including St Agnes in the Isles of Scilly and St Just in far west Cornwall.

Long ago I wrote the following 'Where to watch' books, which were published between 1994 and 2001. These were planned to cover the world but there is one missing. The seventh book, Where to watch birds in North America, would have completed the series but despite researching and writing the book, it was, to cut a long story short and much to my dismay, never published.

If you don’t know which continent or which country/countries to visit why not take a look at one or all of the six books. They are all many years old of course, but they still provide a starting point, an overview and a guiding light to the best birds and the best places to look for them in each region, and could save hours of searching for similar information on the internet. However, it is important to check more up-to-date sources for sites which have been opened up, sites and species which have been discovered, lodges that have been built etc. since they were published.

‘Just like British birding, the temptation to ‘follow the news’ when going global is all too great ... How about taking on an extreme rarity-finding challenge? ... The first steps are easy: throw away the Lonely Planet, and Wheatley for that matter ...’