The Endemic and near-endemic Birds of the World 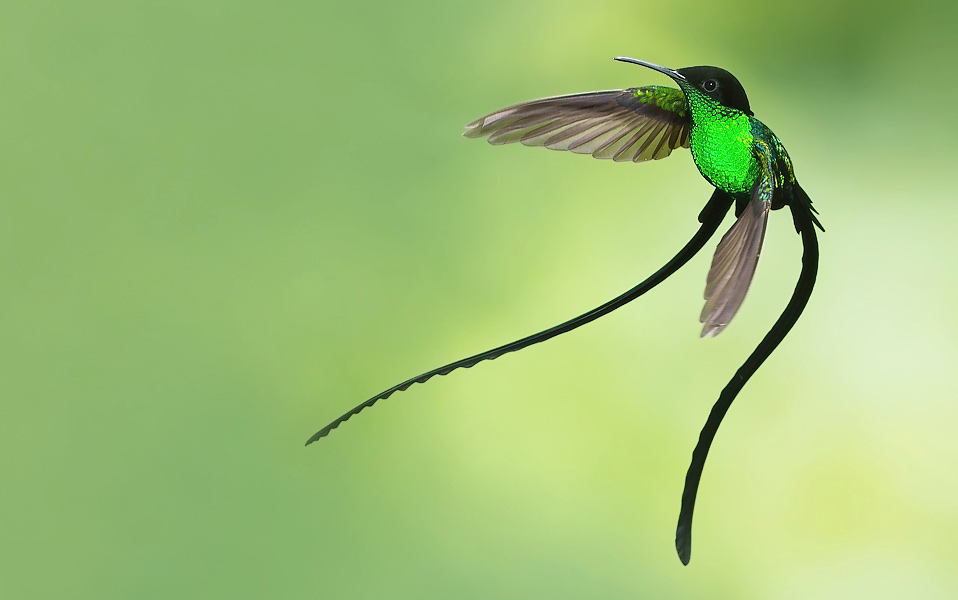 You will have to visit Jamaica if you want to see a Black-billed Streamertail. This fantastic image was captured by Dubi Shapiro. 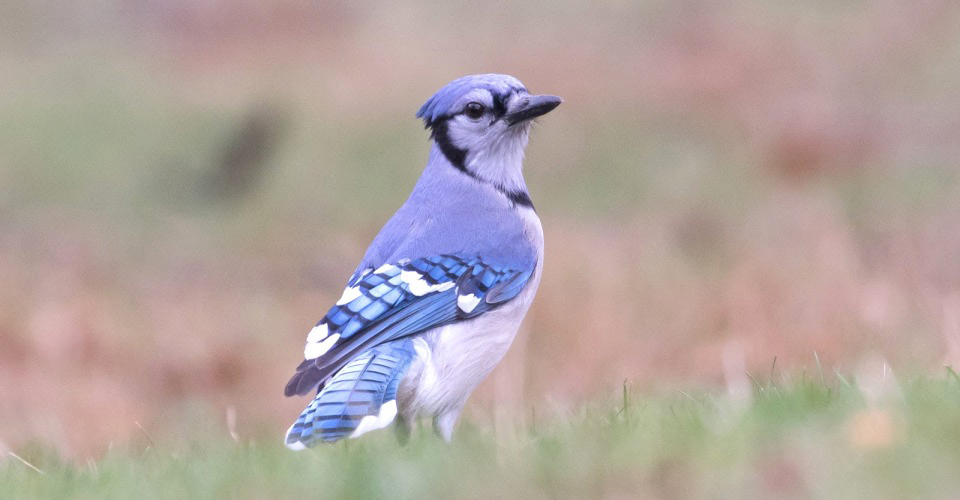 Blue Jay in Central Park, New York, by Simon Colenutt. The beautiful Blue Jay occurs in Canada and the lower 48 states of the USA from the east to the mid-west south to Texas. 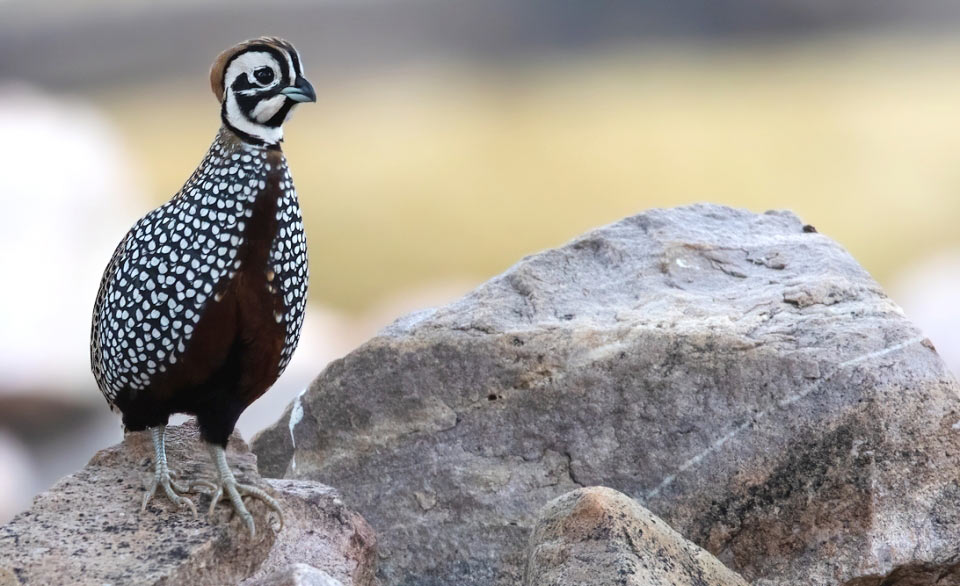 (Sinaloa Martin is present in summer (the winter range is unknown). Imperial Woodpecker is presumed extinct).

Guadalupe Island, off west Baja 1 Guadalupe (Dark-eyed) Junco. (Guadalupe Storm-petrel has not been recorded since 1912).

(Townsend’s Shearwater nests on Socorro and ranges to Baja and the southwest coast of Mexico).

(The range of Yucatan Vireo also reaches Belize, as well as Islas Cozumel and Mujeres, the Belize Cays, the Honduras Bay Islands and Grand Cayman in the Cayman Islands of the Caribbean)

(Guanacaste Hummingbird, known from Volcan de Miravalles in the northwest, is probably extinct)

(The orange-bellied race of Collared Trogon, endemic to Costa Rica and Panama, is considered to be a full species by some taxonomists) 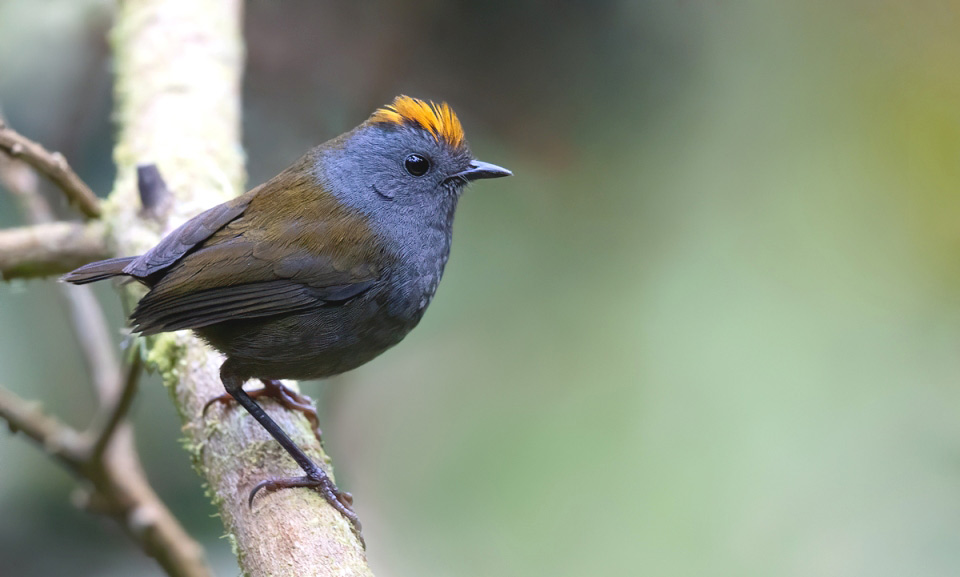 A superb image of the unique Wrenthrush at Cabanas Los Quetzales in Panama by Dubi Shapiro. Neither a wren nor a thrush, in a family of its own, this species also known as Zeledonia after José Castulo Zeledón who described the bird to science in 1907, lives in the highland forests of Costa Rica and western Panama. 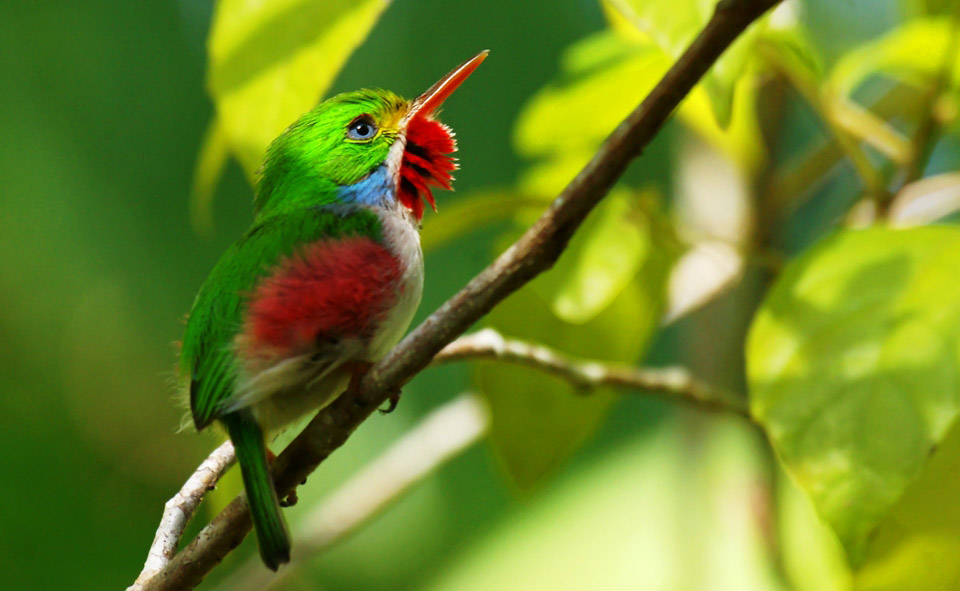 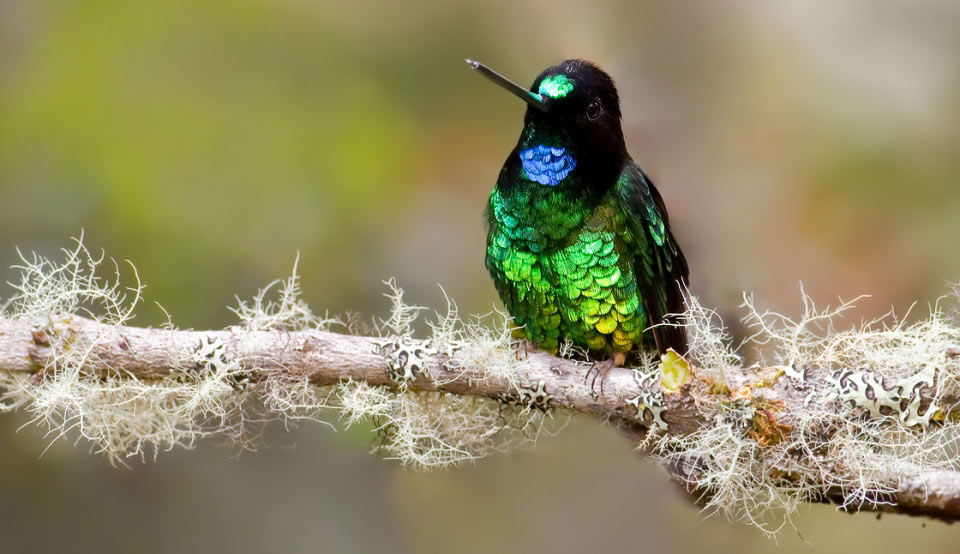 Dusky Starfrontlet at Colibri del Sol Nature Reserve by Dubi Shapiro, one of the most localized and rarest Colombian endemics. 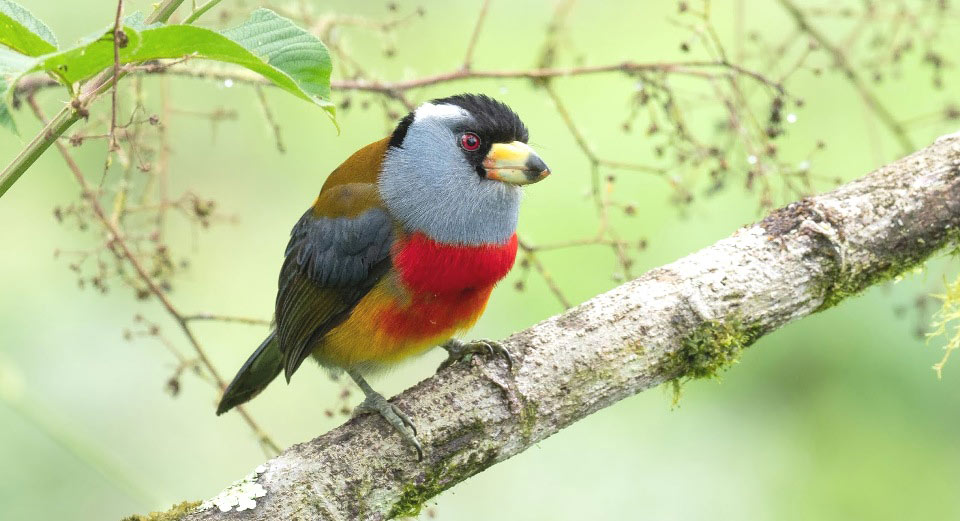 Toucan Barbet at Paz de la Aves Reserve near Mindo in Ecuador by Simon Colenutt. This colourful bird of Colombia and Ecuador is one of two members of the Semnornithidae family, along with Prong-billed Barbet which occurs in Costa Rica and Panama.

(Waved Albatross nests (April to December) on Espanola Island in the Galapagos and Isla de la Plata (a few pairs only) off Ecuador, and ranges at sea to the Humboldt Current off Ecuador and Peru, sometimes Chile. Swallow-tailed Gull nests all year round on Galapagos and Mapelo Island (in small numbers) off Colombia, and ranges at sea from Colombia to Peru, rarely to central Chile) 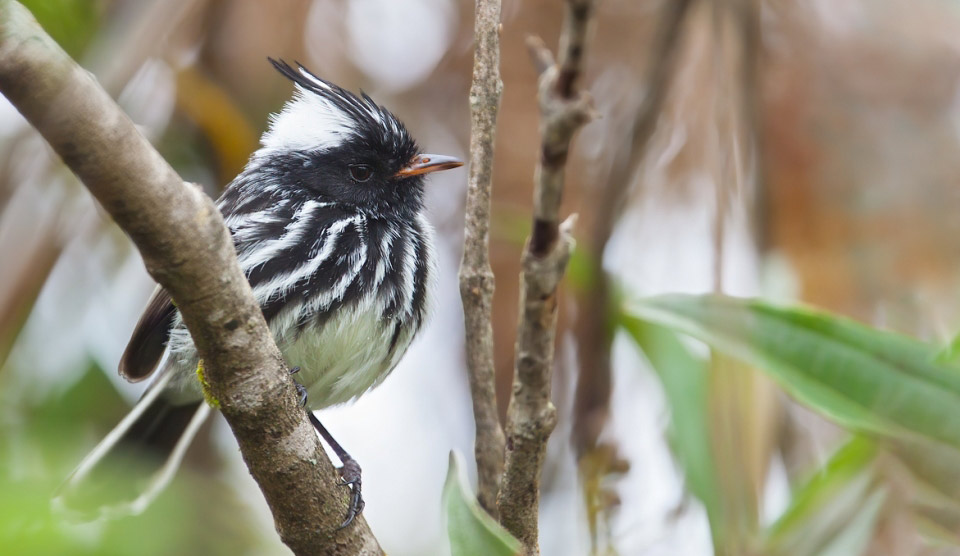 Black-crested Tit-tyrant at Utuana in far south Ecuador near the border with Peru by Dubi Shapiro. The range of this species falls mainly within Peru and only just reaches the far south of Ecuador. 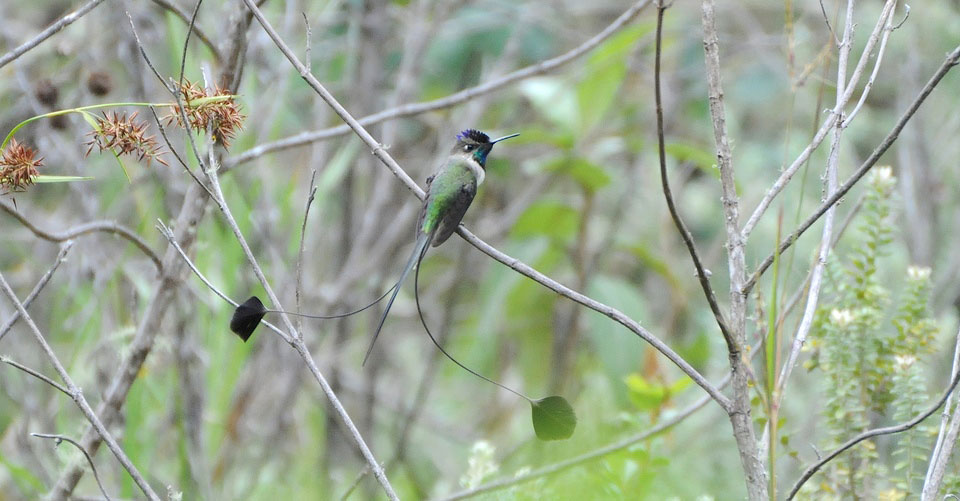 The amazing Marvellous Spatuletail at Pomacochas in Northern Peru by Christian Nunes. This wonder of the bird world has a tiny range on the eastern slopes of the Rio Utcubamba Valley where even there it is uncommon. 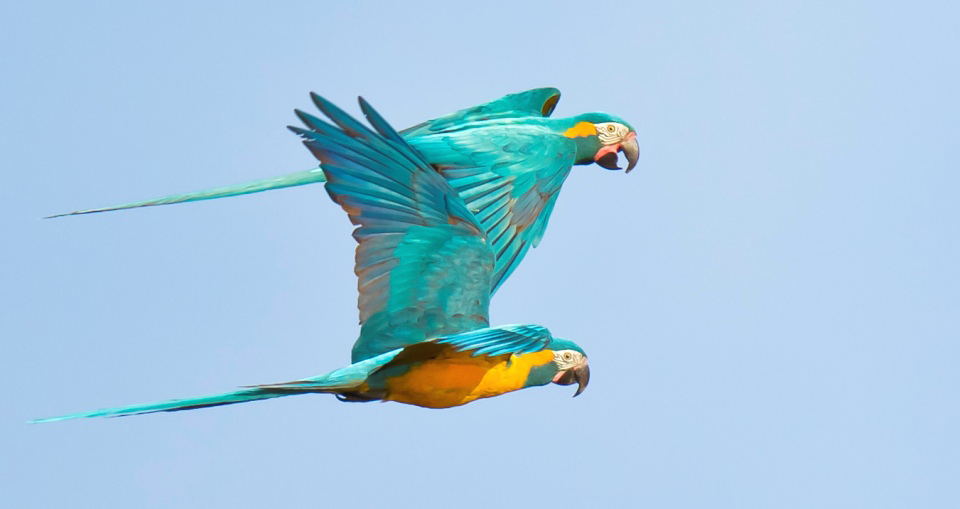 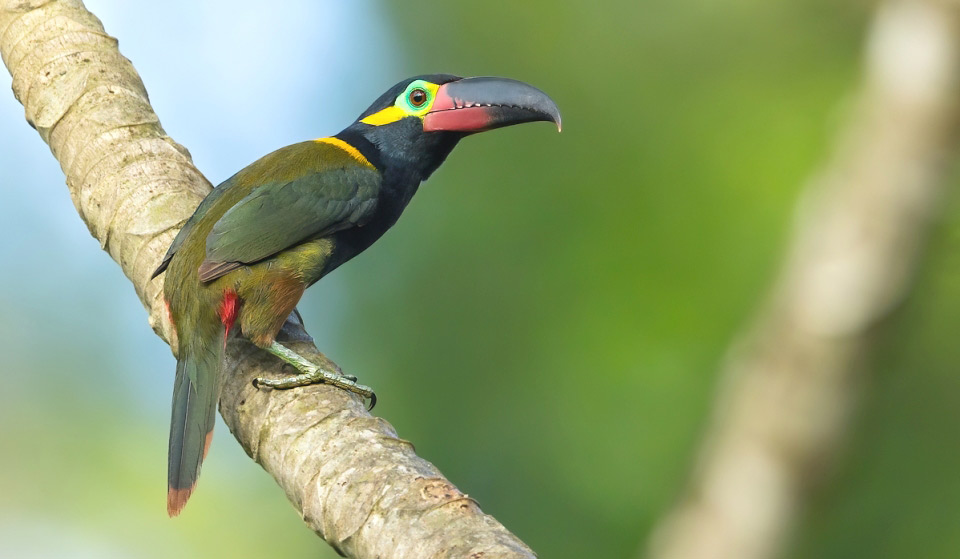 Guianan Toucanet at Iwokrama River Lodge in Guyana by Dubi Shapiro. This beauty occurs in southeast Venezuela, the Guianas and north Brazil.

FRENCH GUIANA 1 Cayenne Nightjar (known only from the type specimen, a male taken on the Fleuve Mana in the northwest in 1917, although a possible female was caught at the Saül airstrip in 1982).

The fantastic Frilled Coquette, a Brazilian endemic, by Chris Townend.

(Stresemann’s Bristlefront may be extinct. A survey in 1995 found 15 birds in an area the species was thought to exist in, in Bahia state, but during an extensive search in 2018 just a single female was found and up to October 2019 that remained the case)

(There have been no records of Kinglet Calyptura since 1996)

(Belem (Bare-faced) Curassow has not been recorded in the wild since the late 1970s, and Spix’s Macaw is extinct in the wild) 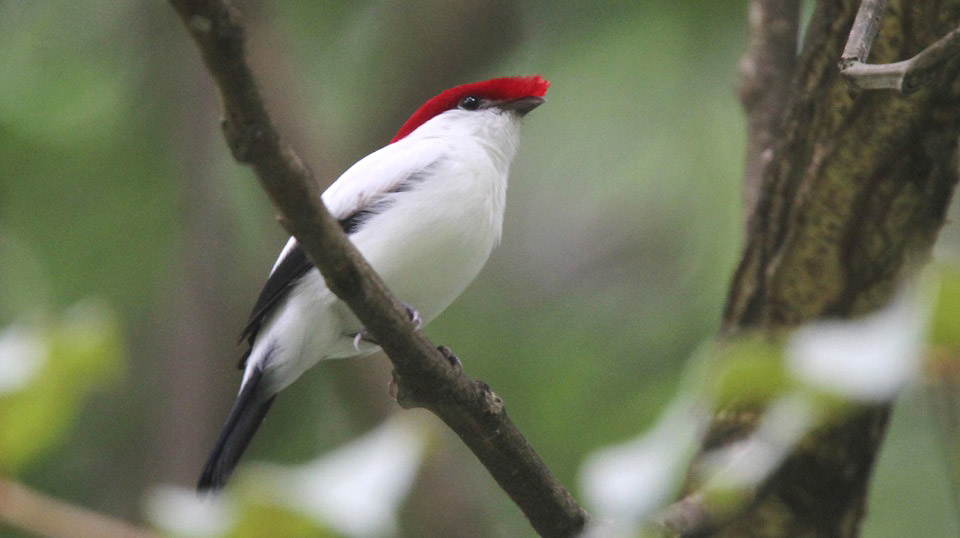 The striking Araripe Manakin, by Brian Field, has a tiny range in the Chapada do Araripe of northeast Brazil, an upland area just 50 km long and one km wide.

The unique Magellanic Plover at Laguna Verde, Tierra del Fuego, Chile by Paul Jones. This patagonian endemic is in a family all of its own.

(Juan Fernandez Petrel nests from December to May on Alejandro Selkirk and ranges at sea from central Chile to the tropical central and east Pacific. Masatierra (De Filippi’s) Petrel nests in mainly July to December in the Juan Fernandez Islands, and the Desventurada Islands to the north, and ranges at sea in the Humboldt Current area west of central Chile to north Peru)

(Monteiro's (Band-rumped) Storm-petrel is an endemic breeding species which breeds mainly from late May-early June to September. It's 'at-sea' distribution is unknown but it may range west across the subtropical Atlantic)

ALGERIA 1 Algerian Nuthatch (small range in the Petite Kabylie region of the north).

Cameroon and Bioko (island in Gulf of Guinea) 2 Mountain Saw-wing and Ursula’s Sunbird.

SUDAN 1 Red Sea Swallow (known only from a single specimen, found in May 1984 at the Sanganeb Lighthouse near Port Sudan).

(Nechisar Nightjar is known only from a single wing found on the Nechisar Plains in the southwest. Liben Lark has not been recorded in Somalia since 1922) 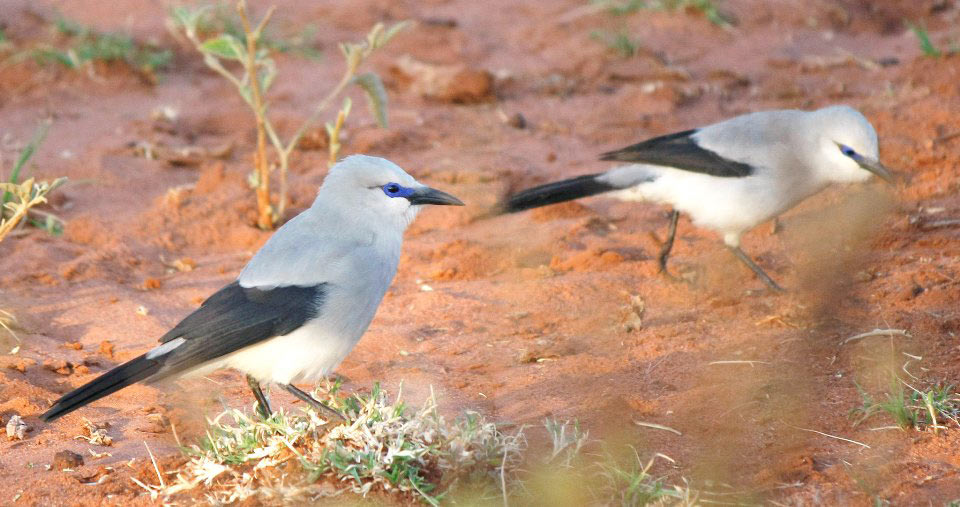 The unique Ethiopian or Stresemann's Bushcrow is endemic to a very small area of thorn acacia country around Arero, Mega and Yabelo in southern Ethiopia where this image was captured by David Beadle. 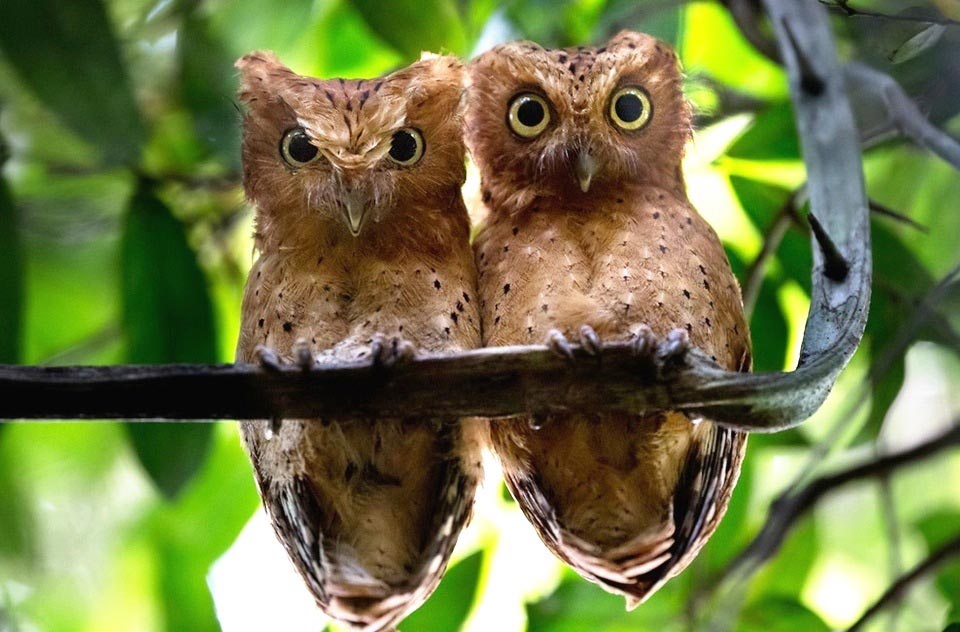 A pair of Sokoke Scops-owls in Sokoke Forest, Kenya by Lars Petersson. This tiny owl (15 cm/6 inches) occurs only in the red soil Cynometra area of the Arabuko-Sokoke Forest in southeast Kenya and the foothill forests of the East Usambara Mountains in northeast Tanzania. 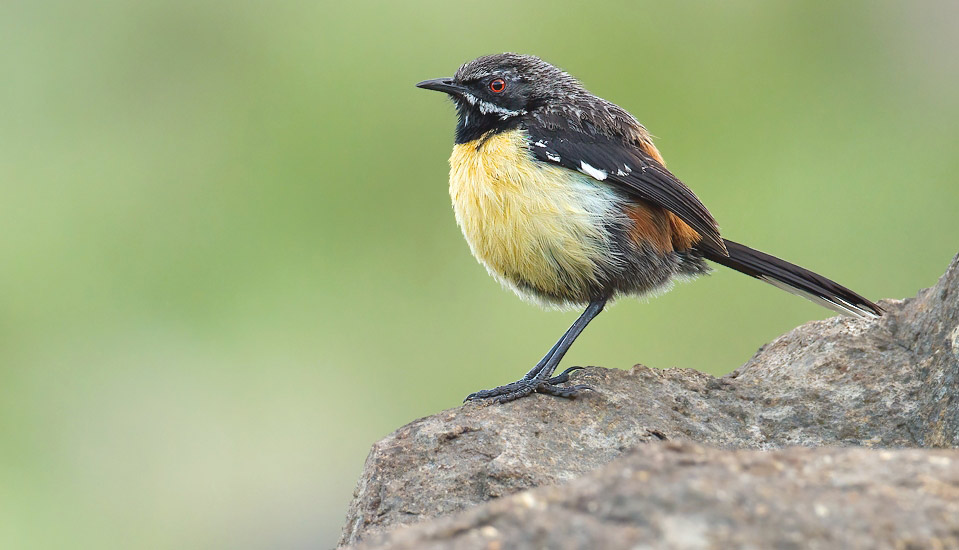 Drakensberg Rockjumper in the Drakensberg Mountains by Dubi Shapiro. One of the two species in the rockjumper family endemic to South Africa including Eswatini.

(Madagascar Pond-heron, Madagascar Pratincole and Mascarene Martin all range to east Africa during their non-breeding seasons) 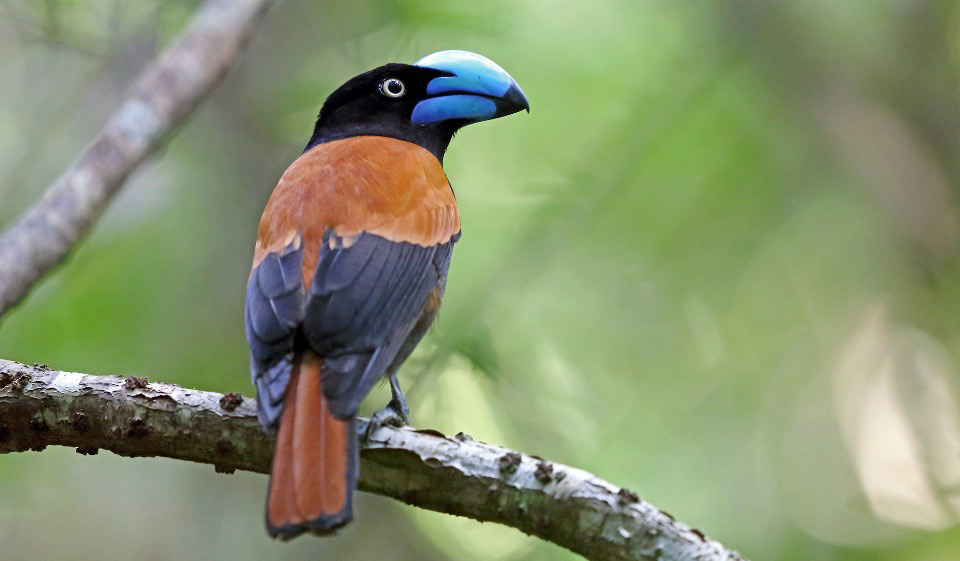 Helmet Vanga by Nigel Voaden, one of Madagascar's 17 endemic vangas.

AMSTERDAM ISLAND (France) 1 Amsterdam Albatross nests on this island and ranges at sea to the southern Indian Ocean as far as southern Australia but it is very rarely identified away from Amsterdam Island.

(Moltoni's (Subalpine) Warbler breeds on Corsica and Sardinia, as well as around the Ligurian Sea (in northern Italy for example) and the Balearic Islands. It winters in Algeria and Sub-Saharan West Africa). Marmora's Warbler is resident on Corsica and Sardinia, and other islands in the Ligurian Sea next to northern Italy. It winters to northern Africa. Mediterranean (Spotted) Flycatcher breeds on Corsica, Sardinia and the Balearic Islands, and winters in west Africa. Italian sparrow occurs on Corsica, in northern Italy and neighbouring regions (with intermediates with House Sparrow in the Alps) and the rest of Italy including Sicily and other islands in the Mediterranean (with intermediates with Spanish Sparrow across central and southern Italy, and on Malta, Crete etc.)

Japan, Taiwan and Philippines 3 Black-chinned Fruit-dove, Ryukyu Scops-owl (Nansei-Shoto Archipelago, Lanyu Island off southeast Taiwan, and the Batanes and Babuyan Islands off northern Luzon, Philippines) and Ijima’s Leaf-warbler (Izu and Tokara Islands, Japan, in summer, migrating south via Taiwan to the Philippines during the winter when rarely seen). 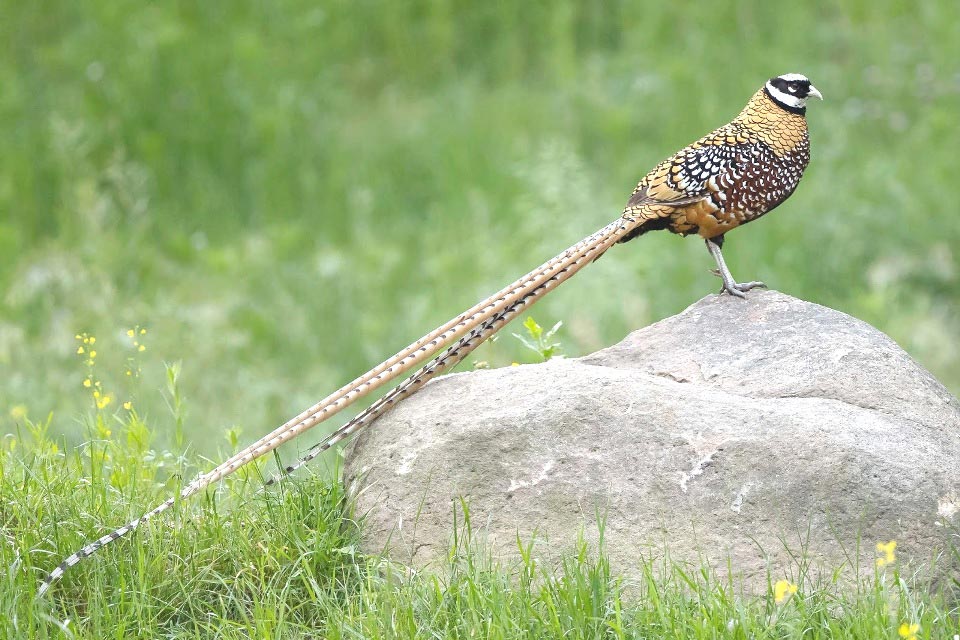 Reeve's Pheasant in Dongzhai Nature Reserve by Simon Colenutt. This incredible bird, endemic to China, has possibly the longest tail feathers of any bird, reportedly up to 2.4 m (7.9 ft) long. 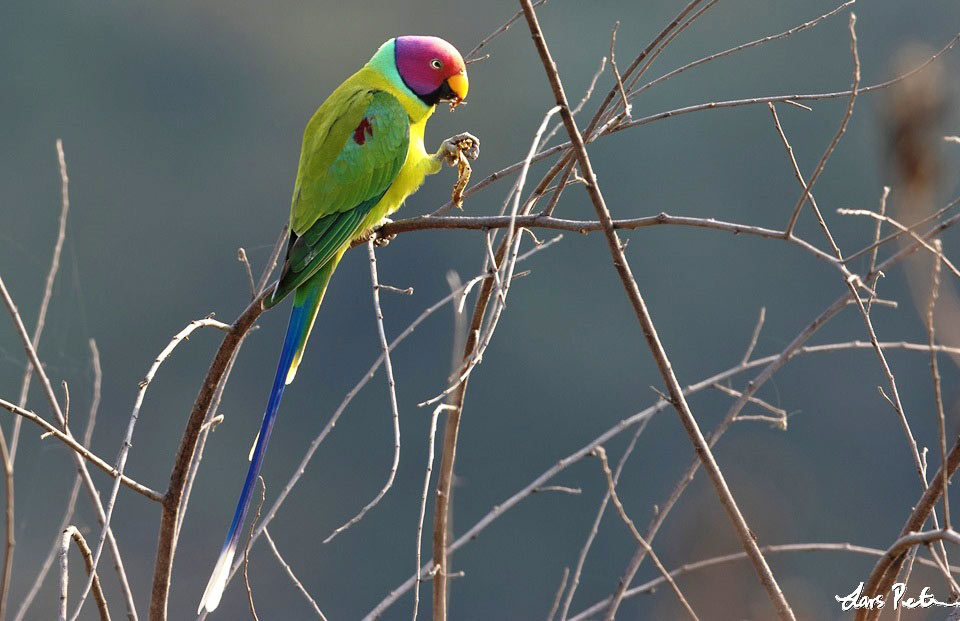 Plum-headed Parakeet in Corbett National Park by Lars Petersson, one of the most beautiful Asian parakeets which is endemic to the Indian Subcontinent.

Andaman and Nicobar Islands (India, between Myanmar and Sumatra) 3 (25 including single archipelago/island endemics, 29 including four species which also occur on a nearby island belonging to Myanmar) Andaman Woodpigeon, Andaman Cuckoo-dove and White-headed Starling. 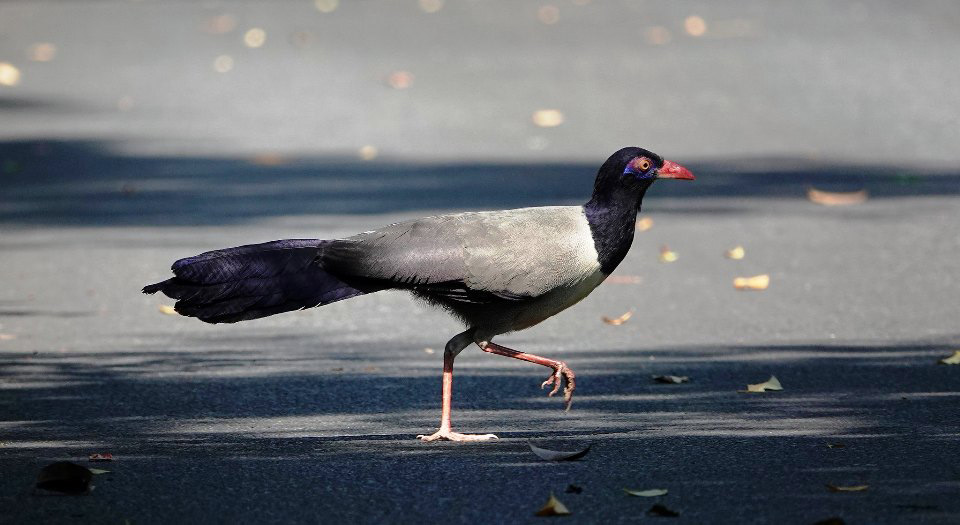 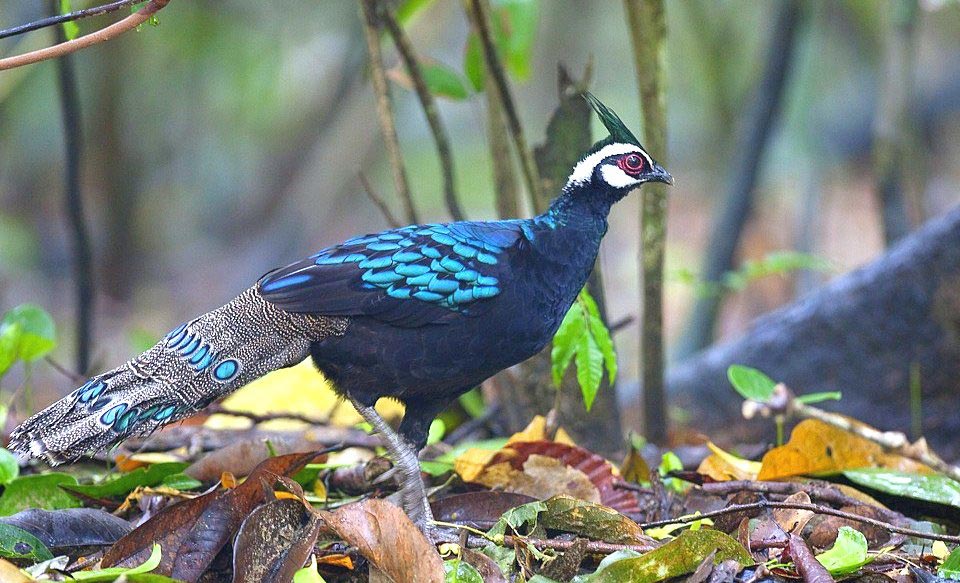 Palawan Peacock-pheasant in St Paul's National Park on the island of Palawan by Francesco Veronesi, one of the mostly very localized eight peacock-pheasants in the world.

(Black-browed (Wren-) Babbler, known only from a single specimen presumably collected between 1843 and 1848, was rediscovered in October 2020 in Kalimantan, southeast Borneo)

(There have been no recent records of Ruck’s Blue (Jungle)-flycatcher known only from four specimens, two of which were collected near Medan in 1917-1918) 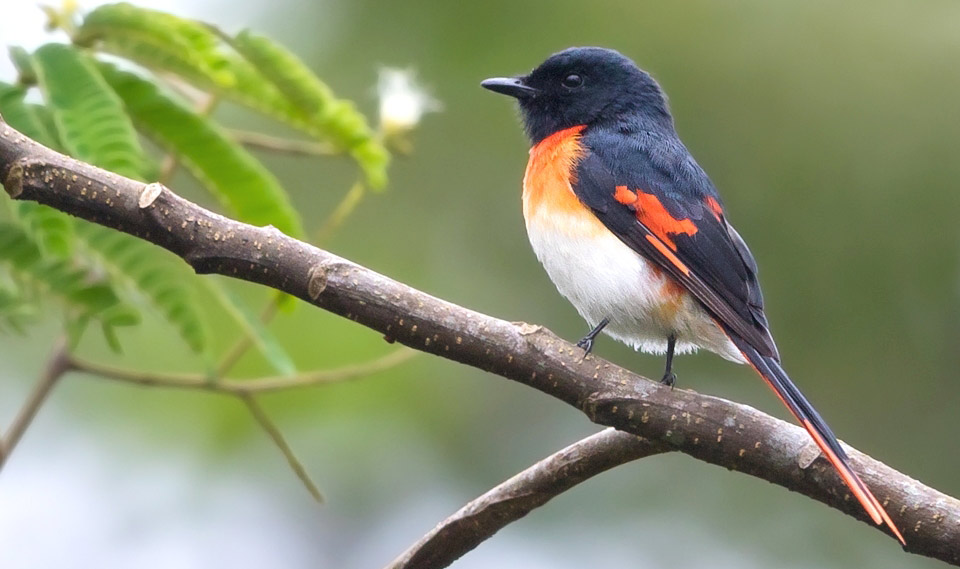 The lovely Flores Minivet at Ranamese Lake on Flores by Dubi Shapiro. This species occurs only on the islands of Flores and Sumbawa in the Lesser Sundas islands of Indonesia. 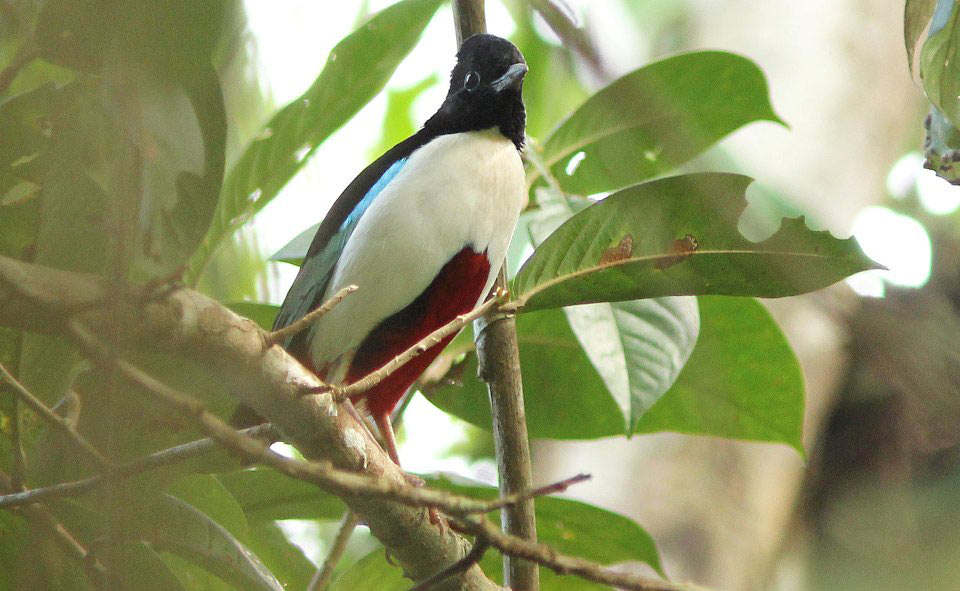 Ivory-breasted Pitta at Foli on Halmahera by David Beadle. This beauty occurs only on the islands of Halmahera, Bacan and Obi with the Morotai race now considered to be a full species.

(Abbott’s Booby is a breeding endemic (mainly June to March), ranging at sea around the island, north to Java) 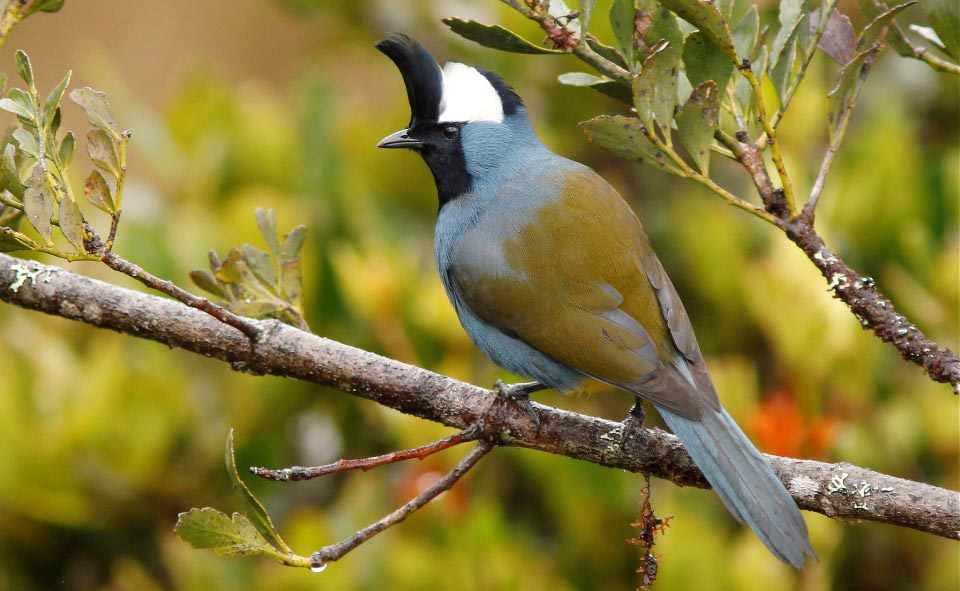 A fantastic image of a Western Crested Berrypecker at Lake Habbema in West Papua by David Beadle. Recently split into Western and Eastern the ‘Crested Berrypecker’ is a large and confiding beauty that inhabits the high montane forests and shrublands on the island of New Guinea. 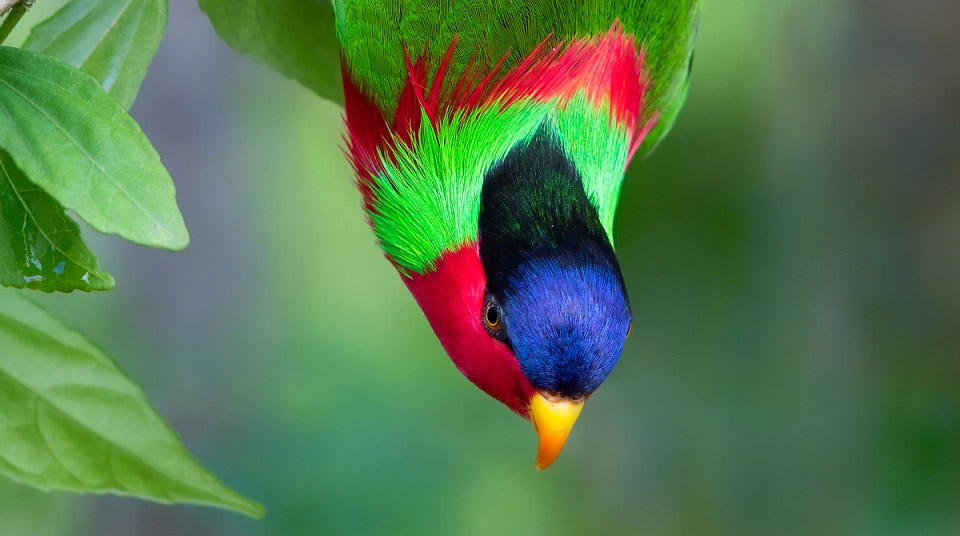 The glorious Collared Lory at Colo-i-Suva Rainforest Eco Resort by Dubi Shapiro. This species is endemic throughout the Fiji archipelago and the only rainforest bird there that has adapted to live in man-made landscapes including urban Suva. 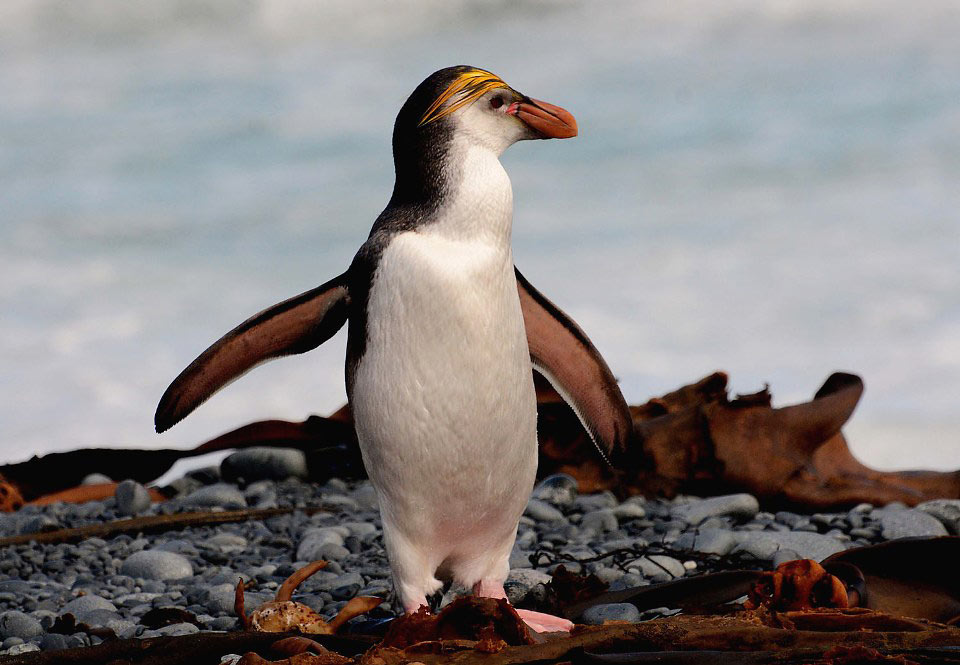 Royal Penguin by Jon Hornbuckle. This species is endemic to Macquarie Island although vagrants have reached Antarctica, New Zealand and Australia.

(Henderson Petrel breeds (mainly May to September) on this island and, apparently, on the southern Tuamotus in French Polynesia, Easter Island and perhaps elsewhere, ranging at sea in this area of the east Pacific)

I am also author of the following 'Where to watch' books which were published between 1994 and 2001. These were planned to cover the world but there is one missing. The seventh book, Where to watch birds in North America, would have completed the series but despite researching and writing the book, it was, to cut a long story short and much to my dismay, never published.

If you don’t know which continent or which country/countries to visit why not take a look at one or all of the six books. They are all many years old of course, but they still provide a starting point, an overview and a guiding light to the best birds and the best places to look for them in each region, and could save hours of searching for similar information on the internet. However, it is important to check more up-to-date sources for sites which have been opened up, sites and species which have been discovered, lodges that have been built etc. since they were published.

‘Just like British birding, the temptation to ‘follow the news’ when going global is all too great ... How about taking on an extreme rarity-finding challenge? ... The first steps are easy: throw away the Lonely Planet, and Wheatley for that matter ...’