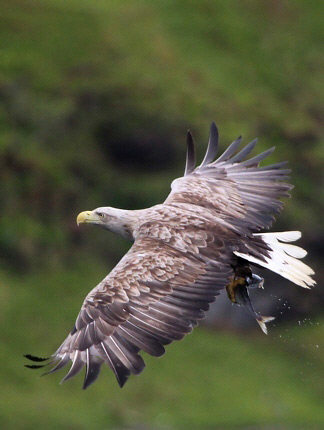 Best Birds and other wildlife in Estonia

Mammals
Brown Bear, Siberian Flying Squirrel, Elk (Moose), (Eurasian) Beaver, Wild Boar, Racoon Dog (introduced), Red Squirrel, Roe Deer, Mountain (Arctic) Hare and Grey Seal. Also a chance of Pine Marten and Ringed Seal. Tracks of Wolf and Eurasian Lynx are quite easy to find, especially when there is snow on the ground, but the actual animals are rarely seen. The same is true of the tiny reintroduced population of European Mink on the island of Hiiumaa.

Invertebrates
There are some spectacular butterflies including Camberwell Beauty and a good selection of dragonflies.

Plants
There are 36 species of orchid in Estonia, 34 of which occur on the island of Saaremaa, where the flower-rich limestone ‘alvar’ habitat is particularly extensive, although the islands of Hiiumaa and Osmussaar are also excellent for wild flowers. One of the greatest densities of plant species in Europe – up to 76 species per square metre – occurs at Puhtu-Laelatu-Virtsu NR.

Best Sites for Birds and other wildlife in Estonia

Best Times for Birds and other wildlife in Estonia

Early March is a good time to see the flocks of wintering Steller's Eiders. This is also the best time to look for Eurasian Lynx because it is the breeding season and the cats are more active and therefore more likely to be out longer after dawn and longer before dusk. They are also more vocal at this time and there may still be snow on the ground, making them easier to track. Bears usually emerge from hibernation from mid-April onwards (although they may emerge as early as late March) and May is a good time to look for them because this coincides with the best time for most birds, including those migrating north, and lekking Great Snipe (before the grass becomes too long to see them well). However, earlier in spring, around early and mid-April, is the peak time to locate grouse, owls and woodpeckers, and usually early enough to see a few Steller’s Eiders before they leave for the Arctic. Hundreds of seaducks, shorebirds and passerines are usually on the move by mid-April, with numbers rising to spectacular peaks in late April-early May. The first half of June is also usually a good time to look for bears, late enough for the arrival of most summer visiting birds and the best time to look for the widest variety of flowers. It is also usually before the main mosquito season when the numbers may be unbearable. September-October is another good time to look for bears, as they are feeding up before hibernation, and autumn bird migration usually peaks during the second half of September.

Accommodation for birders in Estonia

Some Organized Tours for birds and other wildlife to Estonia

Tour companies who run organized tours to Estonia include the following. Many of these also offer custom tours.