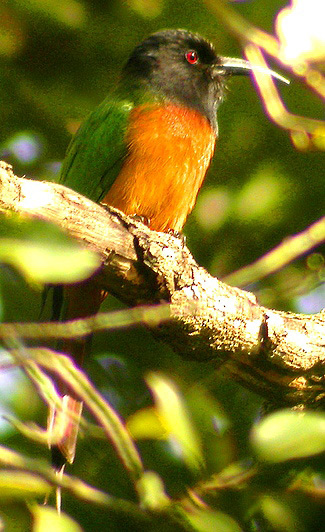 A rare image of a Black-headed Bee-eater by Nigel Voaden. 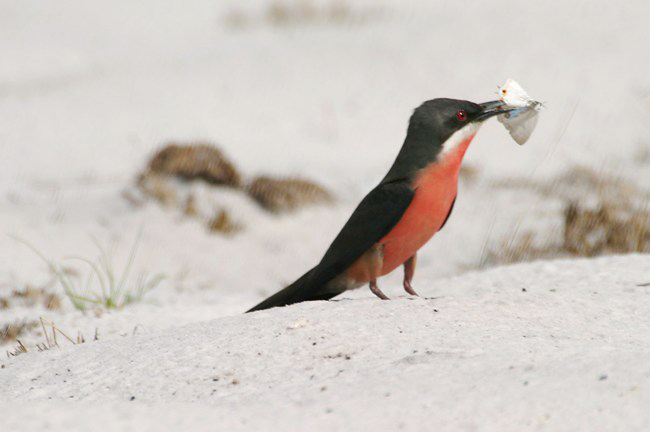 A Rosy Bee-eater at a colony in Loango National Park by Simon Colenutt.

(Some taxonomists believe the island forms of Lemon Dove, Chestnut-winged Starling and São Tomé White-eye (which otherwise occurs only as another race on Principe) are also endemic. Golden-backed Bishop, which occurs on São Tomé and otherwise only in Angola has possibly been introduced to São Tomé). 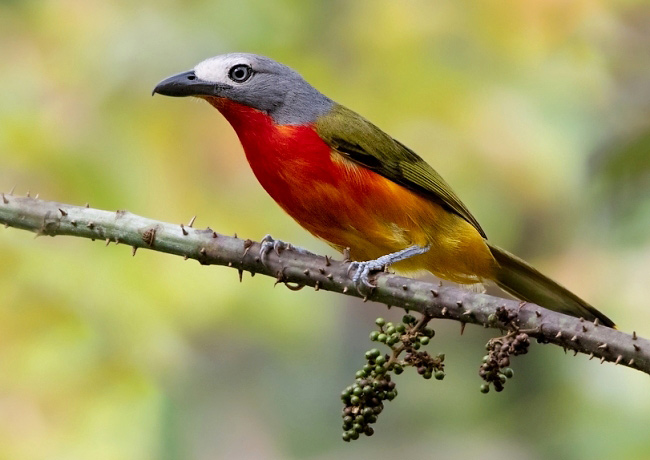 A striking image of a striking but elusive bird, a Fiery-breasted Bushshrike, by Dubi Shapiro.

Best Birds and other wildlife in Gabon

Best Sites for Birds and other wildlife in Gabon

Best Times for Birds and other wildlife in Gabon

The best time to visit for birds is October-November when flocks of Rosy Bee-eaters and African River Martins are usually at their large and impressive coastal nesting colonies where tens to hundreds of thousands arrive in August or September to breed. When the main rains arrive normally in February both species disperse inland with the martins migrating through places such as the Makokou Area in Northern Ivindo NP before spending the non-breeding season in the remote and largely inaccessible areas of the Congo Basin. July-August is the driest time of the year but bird activity can be low during this period. Large mammals and Leatherback Turtles visit the beaches of places such as Loango NP during the wet season, which usually lasts from October to May although it is often dry in December-January. The best time to look for Mandrills is July to October, especially early September when lone males are seeking out females in oestrous. The big troops usually split up in November, the animals disperse widely and become very difficult to find.

Many trip reports, some for Gabon, are posted on the websites listed here. On some of these websites some reports are independent and some are posted by tour companies who organize tours to Gabon. These tour companies and others also post their own reports on their websites, which are listed under 'Some Organized Tours to Gabon' below.

Accommodation for birders in Gabon, Sao Tome and Principe

Some Organized Tours for birds and other wildlife to Gabon, Sao Tome and Principe

Tour companies who run organized tours or can arrange custom tours to Gabon include the following.