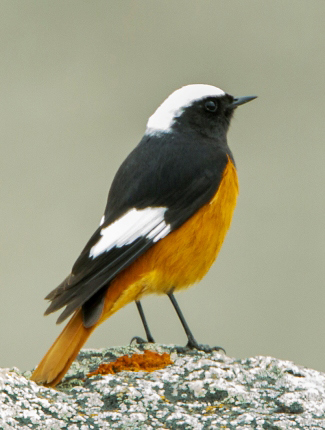 The striking Güldenstädt's or White-winged Redstart by Francesco Veronesi.

Best Birds and other wildlife in Georgia

Birds
The lists below are for the early part of the northern spring.

Plants
Georgia has an amazing array of wild flowers for such a small country, including thirteen species of Primula, many gentians and fritillaries, and rare orchids such as Hooded Orchid, Steven’s Orchid and Caucasian Helleborine.

Best Sites for Birds and other ildlife in Georgia

Best Times for Birds and other wildlife in Georgia

Timing is crucial, at least as far as birds are concerned. By visiting in early spring (late April-early May) the specialities should be relatively easy to find at much lower altitudes than later in the spring and summer, thus avoiding some extremely long treks to see them. The road to Stepantsminda (Kazbegi) is usually open by then and there is normally still enough snow lying to keep the birds in the area around the town and on the nearby slopes. Some summer visitors however do not usually arrive until mid-May or later. The best time for plants is mid-May.

Accommodation for birders in Georgia

Some Organized Tours for birds and other wildlife to Georgia

Tour companies who run organized tours to Georgia include the following. Many of these also offer custom tours.