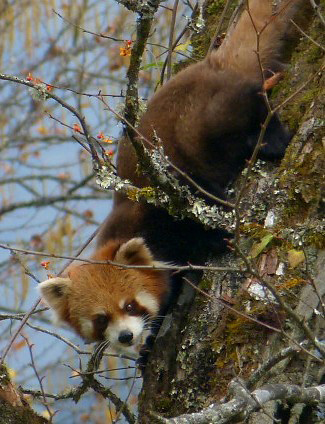 A rare photograph of a wild Red Panda by Richard Webb.

Best Birds and other wildlife in Hange Tham, Nepal

Other Natural Wonders of Nepal

Himalayas Nepal is dominated by the awesome Himalayas. Eight of the ten highest mountains on Earth are there and it is possible to see four of the world's top five from the Makalu Trek; Everest at 8848 (29,028 ft), Kangchenjunga at 8586 (28,169 ft), Lhotse at 8516 m (27,939 ft) and Makalu at 8463 m (27,765 ft). Via the same trek it is also possible to reach Everest base camp at a giddy 5360 m (17,600 ft). During the 45 minute flight between Kathmandu and Bhadrapur, the gateway to Hange Tham, it is possible to see Everest, and several others of the top 10 highest mountains in the world, if the weather is good, from the left-hand side of the plane going to Bhadrapur and vice versa.

Best Sites for Red Pandas, birds and other wildlife in Hange Tham, Nepal

The best sites for Red Panda are the bamboo-filled ravines in the higher temperate forests between Dobato and Hange Tham.

Best Times for Red Pandas, birds and other wildlife in Hange Tham, Nepal

The best times to look for Red Pandas are February to April and October-November. During these times it can be warm to hot in sunshine but very cold when the mist descends, often during the afternoons, and at night. The monsoon season usually lasts from June to September.

Some Organized Tours for Red Pandas, birds and other wildlife to Hange Tham, Nepal

Tour companies who run organized tours or can arrange custom tours to Hange Tham include the following.