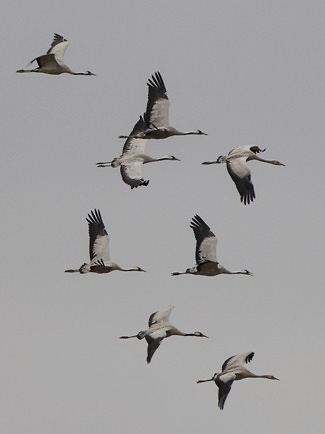 Best Birds and other wildlife in Hungary

Invertebrates
There are nearly 200 species of butterfly including Camberwell Beauty, Clouded Apollo, lots of fritillaries, Common and Hungarian Gliders, Large Copper, Map and Scarce Swallowtail. One place particularly rich in butterflies is Bukk NP and Hills.

Best Sites for Birds and other wildlife in Hungary

Best Times for Birds and other wildlife in Hungary

During the summer the best time for birds is usually late April to early June, especially the first half of May when most visiting breeding species have usually returned from their wintering grounds and passage migrant shorebirds are moving through. The best time for butterflies is the second half of June. Many of the birds present during the summer can also be seen during late August when hundreds of Red-footed Falcons usually roost at traditional sites. Large flocks of cranes usually arrive from September with peak numbers during October into the first week of November when Red-breasted and Lesser White-fronted Geese become possible.

Accommodation for birders in Hungary

Some Organized Tours for birds and other wildlife to Hungary

Tour companies who run organized tours to Hungary include the following. Many of these also offer custom tours.