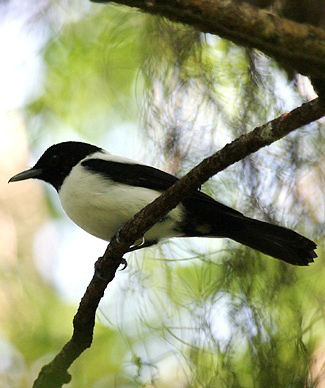 Best Birds and other wildlife in Micronesia

Guam Endemics 1 Guam Kingfisher (extinct in the wild since 1988 due to the introduction of Brown Tree Snakes (the reason other Guam birds have become extinct) this species now survives only in captivity where there were fewer than two hundred individuals in 2017, although there were plans then to reintroduce some birds to another suitable island).

Pohnpei 8 Pohnpei Kingfisher, Pohnpei Lorikeet, Pohnpei Cicadabird, Pohnpei Fantail, Pohnpei Flycatcher, Long-billed White-eye, Pohnpei White-eye and Pohnpei Starling (not recorded since a specimen from 1994 despite an expedition to the high ridges in late 2010 and a thorough survey of the island in 2012).

Other specialities
Slaty-legged Crake and Micronesian Starling. Also a chance of Nicobar Pigeon.

Reptiles, Amphibians and Fish
One of the best places in the world to snorkel or scuba-dive with Manta Rays is the feeding area and cleaning station in the M’il Channel on Yap. Numerous colourful coral reef fish occur around both island groups, with over 1500 fish species recorded from Palau alone, many of which frequent the wrecks left after World War II.

Invertebrates
The remarkable 'Jellyfish Lake', where it is possible to swim amongst thousands of melon-sized stingless jellyfish, is on Palau. Some people have estimated that there may be 20 million jellyfish in the lake. They follow sunlight and by mid-afternoon usually concentrate at the western end of the lake.

Mammals
Flying Foxes are present on most islands.

Best Sites for Birds and other wildlife in Micronesia

Best Times for Birds and other wildlife in Micronesia

The best time to look for birds is January to March, the coolest, least humid and driest time of the year. Manta Rays are resident around Yap but from December to April they usually live on the more easily accessible western side of the island, visiting the cleaning stations in M’il Channel, whereas during the rest of the year they are usually found on the eastern side of the island, in Goofnow Channel. The peak time for Manta Rays around Palau and Peleliu is November to May and the best time to experience 'Jellyfish Lake' is January to March.

A Field Guide to the Birds of Yap Island by J F Clements. Ibis Publishing Company, 2003.

Don’t know which countries/islands/regions to visit in Oceania? Then it may be worth considering taking a look at this book, written by this website’s author. It is many years old of course but it still provides a starting point, an overview and a guiding light to the best birds and the best places to look for them in the region, and could save hours of searching for similar information on the internet. However, it is important to check more up-to-date sources for sites which have been opened up, sites and species which have been discovered, lodges that have been built etc. since the book was published.

Accommodation for birders in Micronesia

Some Organized Tours for birds and other wildlife to Micronesia

Tour companies who are running organized tours to Micronesia in the next couple of years include the following. Many of these also offer custom tours.