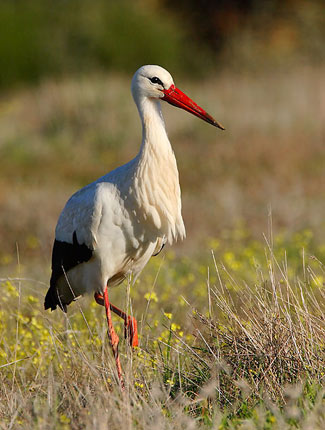 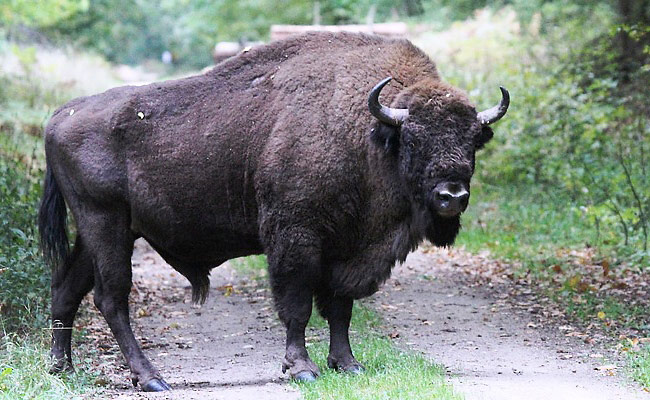 A bull European Bison photographed in Bialowieza Forest in September 2015 by Lee Dingain.

Best Birds and other wildlife in Poland

Mammals
Red Deer and Red Squirrel. Also a chance of European Bison (reintroduced), Elk (Moose), Wild Boar and (Eurasian) Beaver, and an outside chance of Wolf (especially during the northern winter when a lack of vegetation cover, shortage of food supply and the possibility to follow tracks in snow all combine to make January especially a good time to look for Wolf and Eurasian Lynx, with a chance of Racoon Dog, Beaver, Polecat, and Beech and Pine Martens).

Invertebrates
There are nearly 80 species of butterfly at the Biebrza Marshes alone including Map, with those elsewhere including Camberwell Beauty. There is also a good selection of dragonflies including Yellow-legged Clubtail and Red-eyed Damselfly.

Plants
Some of the trees in Bialowieza are hundreds of years old and the tallest oaks have trunks which rise for over 30 m (100ft) before they branch, with some trees in excess of 50 m (164 ft) high. Altogether in Bialowieza there are over a thousand higher plant species and about 1500 species of fungi, including many which are rare elsewhere in Europe.

Best Sites for Birds and other wildlife in Poland

Best Times for Birds and other wildlife in Poland

The best time for the greatest variety of birds is usually the second half of May when most of the summer visitors have arrived but Hazel Grouse, owls and some woodpeckers may have already raised their young by this time so they are easier to find in early April. May is also usually the peak time for plants.

The best time to look for Bison is from late winter to early June, especially April, when they usually form large herds, the broadleaf trees are mostly still bare, maximizing visibility, and there is usually at least some snow on the ground, helping to reveal their tracks to the local guides who may then find it easier to locate them.

Lack of vegetation cover, shortage of food supply and the possibility to follow tracks in snow all combine to make January especially a good time to look for Eurasian Lynx and Wolf, as well as Elk and Wild Boar, with a chance of Racoon Dog, Beaver, Polecat, and Beech and Pine Martens. Daytime temperatures at this time of year can be around freezing and cold winds may add to the chill factor so it is best to be prepared for such conditions when out tracking.

Accommodation for birders in Poland

Some Organized Tours for birds and other wildlife to Poland

Tour companies who run organized tours to Poland include the following. Many of these also offer custom tours.