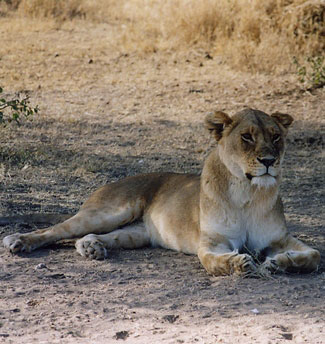 Lioness by Alice Perry. In Southern Tanzania it is possible to track lions on foot in Selous Game Reserve.

Best Birds and other wildlife in Southern Tanzania

Invertebrates
Over 500 butterfly species have been recorded in Udzungwa Mountains NP alone.

Best Sites for Birds and other wildlife in Southern Tanzania

Best Times for Birds and other wildlife in Southern Tanzania

The peak time to visit for most mammals and birds is the long dry season which usually lasts from June to October, although February is usually the peak time for plants. African Wild Dogs are easier to track down during their denning season which is normally in June-July. Short, light rains usually occur in November-December and long, heavy rains from March to May.

Accommodation for birders in Southern Tanzania

Some Organized Tours for birds and other wildlife to Southern Tanzania

Tour companies who run organized tours to Southern Tanzania include the following. Many of these also offer custom tours.