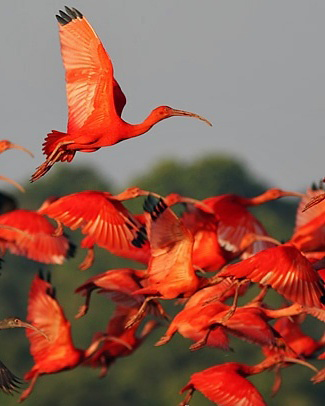 A shocking flock of Scarlet Ibises at Hato El Cedral in the Llanos of Venezuela by Lars Petersson.

Best Birds and other wildlife in West Venezuela

East - Lower Rio Caroni 1 Carrizal Seedeater (Isla Carrizal in the lower Caroni River, Bolivar. Three specimens found in 2001; the only known habitat, stands of spiny Guadua and Ripidocladus species of bamboo, has been cleared to allow construction of the Tocoma Dam, but researchers are hopeful of finding the birds living elsewhere).

Near-endemics - not all in the west.

Other Specialities
Sunbittern. Also a chance of Agami and Zigzag Herons, Sungrebe and Nacunda Nighthawk.

Best Sites for Birds and other wildlife in West Venezuela

Best Times for Birds and other wildlife in West Venezuela

The best time to visit the Llanos is between December and March, especially February-March when it is usually drying out and the wildlife becomes more concentrated. The best time to look for White-bearded Helmetcrest is during the rainy season which usually lasts from April to November, although a few birds seem to remain on the high Andean paramo throughout the year.

Birds of Venezuela by D Ascanio, G Rodriguez and R Restall. Helm, due 2017.

All Birds Venezuela by Bloomsbury/Sunbird Images.

Accommodation for birders in West Venezuela

Some Organized Tours for birds and other wildlife to West Venezuela

Tour companies who run organized tours or can arrange custom tours to Western Venezuela include the following.