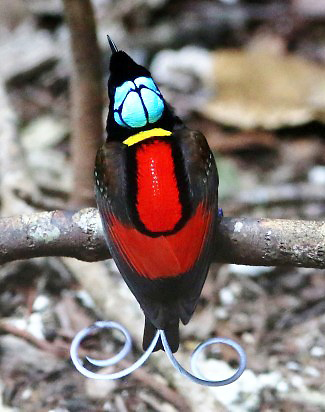 A fantastic male Wilson's Bird-of-paradise waiting for a female to come and inspect his display court on the island of Waigeo, an image captured by Nick Cobb from a palm-leaf hide a few metres away. 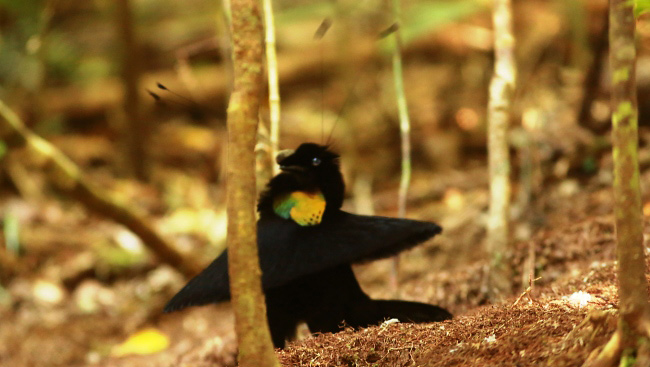 A male Western Parotia displaying at its court in the Arfak Mountains of West Papua, an image captured by Nick Cobb. The bird's head and head-wires move so fast it's almost impossible to get them in focus!

Best Birds and other wildlife in West Papua

Mammals
A chance of Great Spotted and Waigeo Cuscuses, and Striped Possum.

Reptiles, Amphibians and Fish
The islands of the Raja Ampat Archipelago off West Papua, including Batanta, Salawati and Waigeo, lie in an area with the greatest concentration of marine life for an area of its size in the world, with over 1300 fish species, twice as many as there are in the Red Sea and the Caribbean. Whale Sharks are present year round in Cenderawasih Bay between Manokwari and Biak, where it is possible to dive and swim with them.

Best Sites for Birds and other wildlife in West Papua 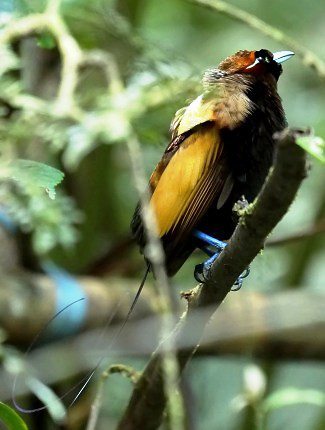 A male Magnificent Bird-of-paradise above its court in the Arfaks, by Paul Macklam. 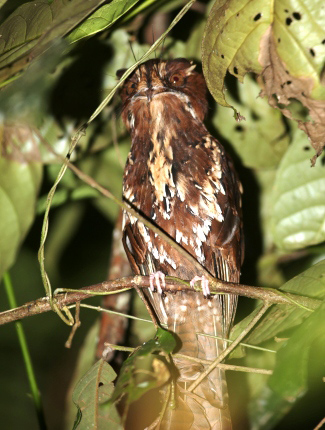 A roosting Feline Owlet-Nightjar in the Arfaks, by Nick Cobb.

Best Times for Birds and other wildlife in West Papua

West Papua has a warm, wet equatorial climate and rain falls year round in the highlands, but there is usually a dry season in the lowlands which lasts from May to October and this is the best time to go, especially September-October for displaying birds of paradise. The best scuba-diving and snorkeling conditions overlap with both ends of this season, from April to June and September to November.

Birds of New Guinea by B M Beehler et al. PUP, 1986 (First Edition but arguably better than the Second).

Birds of New Guinea and the Bismarck Archipelago: Photographic Guide by B Coates. Dove Publications, 2001.

Accommodation for birders in West Papua

Some Organized Tours for birds and other wildlife to West Papua

Tour companies who run organized tours or can arrange custom tours to West Papua include the following.