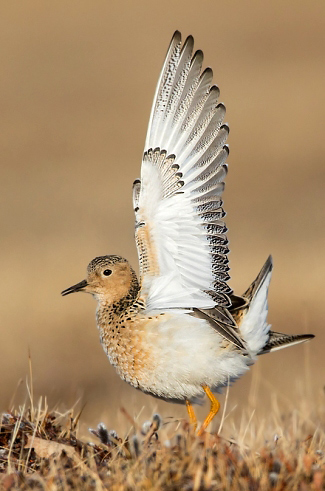 Spectacled, Steller's and King Eiders. These three beautiful ducks, as well as a fourth, Common Eider, occur together at Barrow, Alaska. All three beautiful images taken by Simon Colenutt.

Best Birds and other wildlife in Alaska

Other Natural Wonders of Alaska

Mount McKinley The highest mountain on the North American continent at 6195 m (20,320 ft). Situated in Denali National Park, the base-to-peak rise of about 5500 m (18,000 ft) is one of the largest of any mountain situated entirely above sea level.

Glaciers There are over 5000 glaciers in Alaska, the most famous of which include those which reach the sea in Kenai Fjords NP and the 16 in the 30 km (19 mile) section of the Chugach Mountains of Southeastern Alaska known as College Fjord.

Best Sites for Birds and other wildlife in Alaska 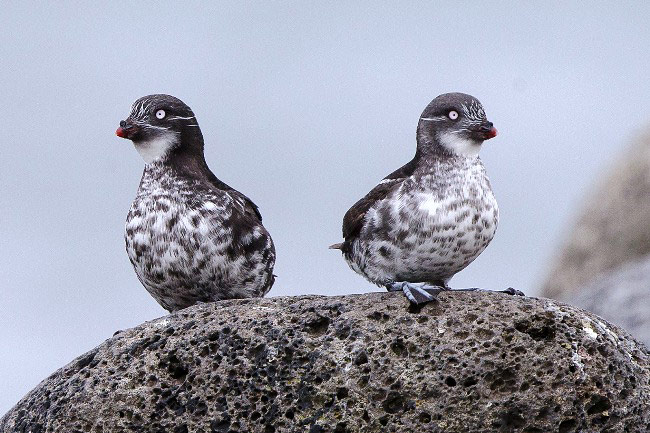 Least Auklets, one of the nine species of alcid (auk) on the Pribilof Islands of Alaska, by Simon Colenutt.

Best Times for Birds and other wildlife in Alaska

June is the best time for birds; Red-legged Kittiwakes are not normally back on their nesting cliffs until then. Humpback and Killer Whales are usually present from May to October with peak numbers in July-August, and Grizzly Bears usually fish at this time, mainly in July and the first half of August but also during the first half of September. After late June to mid-July mosquitoes and other insects make life hell but their numbers usually fall steeply after mid-August, which is the best time to look for Grizzly Bears foraging for berries in Denali NP.

Accommodation for birders in Alaska

Some Organized Tours for birds and other wildlife to Alaska

Tour companies who run organized tours or can arrange custom tours to Alaska include the following.