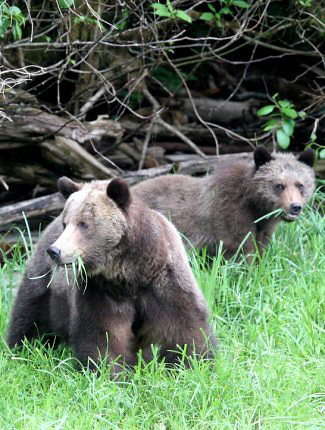 Best Birds and other wildlife in British Columbia, Western Canada

Best Sites for Birds and other wildlife in British Columbia, Western Canada

Best Times for Birds and other wildlife in British Columbia, Western Canada

The best times for Grizzly Bears are May-June when they feed mainly on plants, and especially mid-August to mid-October when they fish for salmon, with the highest numbers likely to be fishing toward the end of the season when they need to fatten up before hibernation. September is also the peak time to look for 'Spirit Bears' but July-August is when Killer Whale numbers usually reach their highest, when the regularly seen pods are joined by those following the salmon runs.

The best time to look for birds in 'spring' is early June, the breeding season is usually at a peak in mid-July and the top time in late summer/autumn/fall for migrating waterbirds and shorebirds in the Vancouver area is September.

Some Organized Tours for Birds and other wildlife to British Columbia, Western Canada

Tour companies who run organized tours or can arrange custom tours to Western Canada include the following.