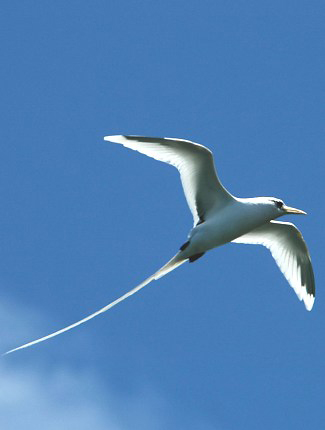 A 'normal' White-tailed Tropicbird photographed by Jon Hornbuckle. Many on Christmas Island have an apricot or golden hue and are known as 'Golden Bosunbirds'.

Best Birds and other wildlife on Christmas Island

Breeding Endemics
Abbott’s Booby (about 3000 pairs, nesting mainly Jun-Mar, and ranging at sea around the island, north to Java) and Christmas Frigatebird (about 2000 pairs in three colonies at the northern end of the island, nesting mostly Jan-Aug).

Best Sites for Birds, crabs and other wildlife on Christmas Island

Most of the seabirds are easy to see from The Settlement, where most of the visitor accommodation is situated. Nesting colonies of both boobies and frigatebirds are at LB4 Lookout and Lily Beach, and both species of tropicbirds nest at Flying Fish Cove, where there is also a superb reef accessible with a mask and snorkel straight from the jetty. Most landbirds are easily seen too although a 4WD may be required to cruise the tracks in the middle of the island for the goshawk. The best place for some rarities, such as Grey Wagtail, is the tip! Flying Foxes usually have a roost on the golf course. For more information visit the Parks Australia office.

Best Times for Birds, crabs and other wildlife on Christmas Island

Most of the endemic birds can be seen all year round on this wet and humid tropical island, although birding is most likely to be affected by the frequent rain, especially during the rainiest season which lasts November to May, and by the Red Crab migration, which usually takes place in November-December, resulting in the closure of some roads, which may prevent access to some birding sites. Daily temperatures vary little from month to month, ranging from a minimum of 22°C in August to a maximum of 28°C in April.

Accommodation for birders on Christmas Island

Some Organized Tours for birds and other wildlife to Christmas Island

Tour companies who run organized tours or can arrange custom tours to Christmas Island include the following.