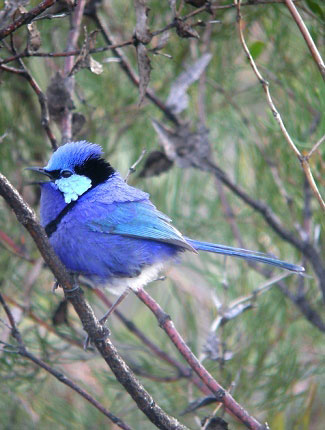 An aptly-named male Splendid Fairy-wren, photographed in the Stirling Ranges by Mark Harper.

Best Birds and other wildlife in Western Australia

Plants
A great variety of wild flowers, including vast spreads of everlastings (Helichrysum spp.), which are usually at their best in mid-September. Also the Karri Tree (Eucalyptus diversicolor) which grows to 90 m (295 ft), one of the tallest trees in the world.

Other Natural Wonders of Western Australia

Best Sites for Birds and other wildlife in Western Australia

Best Times for Birds and other wildlife in Western Australia

Dugongs are most likely to be seen during the southern summer between September and April when they usually feed in the Gladstone Special Purpose Zone in the eastern bay and at the southern end of Henri Freycinet Harbour. During the southern winter they usually move to the warmer waters off Dirk Hartog Island, and the Bernier and Dorre Islands. Whale Sharks are usually present at Ningaloo Reef (Exmouth) between April and June, so April is the best time to try and see these two. Manta Rays are also usually present but they usually occur in greater numbers between May and September.

The start of the southern spring, mid-September to mid-October, is the best time to look for birds because many resident species breed at this time and are therefore at their most active and they are joined by migrants from the north, but many birds can be seen just as easily in April. The best time for wild flower displays is usually mid-September and turtles usually start to nest in the Ningaloo Reef area in November.

Accommodation for birders in Western Australia

Some Organized Tours for birds and other wildlife to Western Australia

Tour companies who run organized tours or can arrange custom tours to Western Australia include the following.