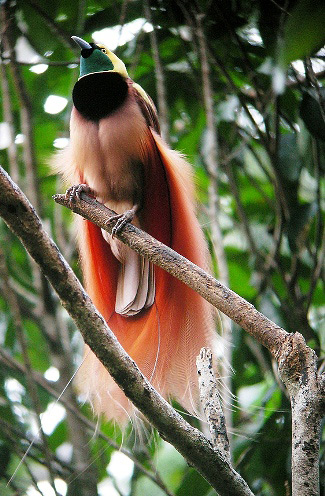 The destinations listed and linked below are the ones we believe are the best in Australasia and Oceania. They have been chosen very carefully and for a multitude of reasons, but mainly based on personal experience of some of them and on dreams of visiting the rest, dreams resulting from what we have heard, read or seen.

It is our intention to update this list regularly as we add destinations and it was last updated in May 2019.

If there are any other destinations you think should be on the list below then please feel free to Email us.

The first and arguably most important destination to consider is a Local Patch, somewhere a short walk from home where it is possible to see a wide range of birds and other wildlife any day of the year.

American Samoa (for Western Samoa see Samoa, below)
American Samoa supports the powelli race of Fiji Shrikebill which some taxonomists believe to be a full species. It occurs on the islands of Ta'u and Ofu-Olosega. Other landbirds present include Blue-crowned Lorikeet, Many-coloured Fruit Dove, Wattled Honeyeater, Cardinal Myzomela, and Polynesian and Samoan Starlings. Many seabirds nest on Rose Atoll NWR including Red-tailed Tropicbird, boobies, frigatebirds, noddies, and Sooty and White Terns. 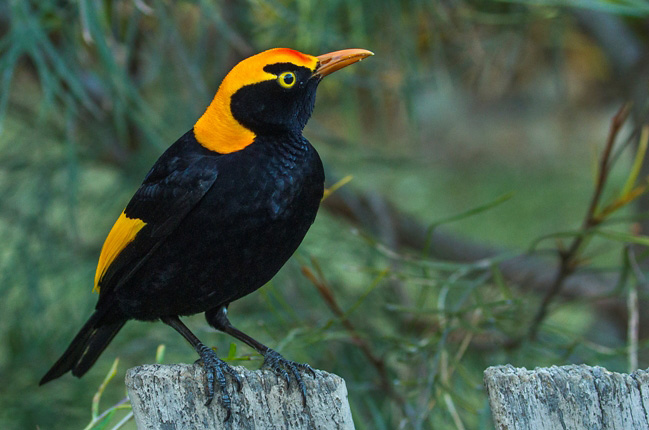 The stunning male Regent Bowerbird at Lamington National Park near Brisbane where this species is common and confiding, by Francesco Veronesi.

Australia - Northern
Saltwater Crocodiles in Kakadu and endemic birds such as Gouldian Finch and Rainbow Pitta.

Australia - Northwestern
Tens of thousands of shorebirds at Broome, and Black Grasswren in the Kimberley.

Cook Islands
It is only necessary to visit three of the 15 widely scattered Cook Islands to see the six endemic bird species: the island of Atiu for the endemic Atiu Swiftlet (which can be seen at the nest in Anatakitaki Cave, one of several spectacular caves on the islands) and Lilac-crowned Fruit Dove (which also occurs on Rarotonga but is much scarcer there), as well as Kuhl's Lorikeet, which otherwise occurs only on remote Rimatara in the Austral Islands, and has been reintroduced to this island, Chattering Kingfisher, the range of which extends beyond the Cook Islands to the Society Islands, and the more widespread Pacific Imperial Pigeon; the island of Rarotonga for the endemic Rarotonga Monarch in Takitumu Conservation Area (a bird which has also been introduced to Atiu) and Rarotonga Starling; and the island of Mangaia for the endemic Mangaia (Mewing) Kingfisher and Cook Islands Reed Warbler. In addition, Blue (Violet) Lorikeet has been introduced to Aitutaki where there is also a chance of seeing Bristle-thighed Curlew, mainly from November to March. Seabirds present throughout the Cook Islands include Herald Petrel (most likely on and around Rarotonga), Red-tailed and White-tailed Tropicbirds, Great and Lesser Frigatebirds, Red-footed Booby, Black and Brown Noddies, and White Terns. It is usually dry and cool from June to October, the best time to visit, with most rain falling during the cyclone season between December and May.

The astonishing Golden Dove is endemic to Fiji where this image was taken by Dubi Shapiro.

French Polynesia
Lots of seabirds including White Tern, and endemic birds such as Tuamotu Sandpiper.

Indonesia - West Papua
Fantastic birds-of-paradise including Wilson's, and the richest coral reefs in the world!

Micronesia
Fifty endemic birds and one of the best places in the world for Manta Rays.

New Caledonia
The unique Kagu and other endemic birds including a tool-using crow. 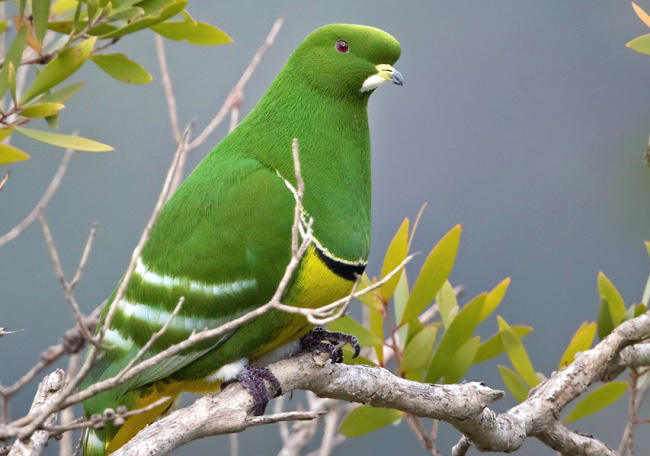 The strange Cloven-feathered Dove occurs only on the island of New Caledonia where this fine image was taken by Lars Petersson.

Papua New Guinea
Fantastic birds-of-paradise, including Blue, and some of the richest coral reefs in the world. 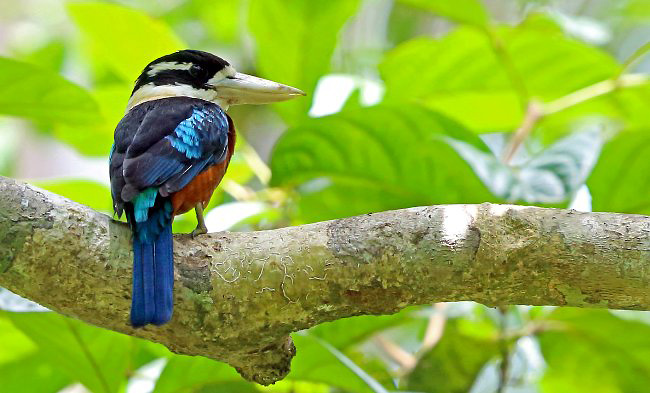 New Guinea is home to so much more than birds-of-paradise. The widespread Rufous-bellied Kookaburra for example is one of numerous spectacular endemics. Both males and females have massive white bills but males have blue tails and females rufous. This male was captured by Nigel Voaden.

Polynesia
Lots of seabirds including White Tern, and endemic birds such as Tuamotu Sandpiper.

Samoa (Western)
Samoa consists of two large islands (Upolu and Savai’i) and eight islets and supports at least nine endemic bird species; Tooth-billed Pigeon (which is very rare and unlikely to be seen), a fruit-dove, Flat-billed Kingfisher, a honeyeater known as Mao, a whistler, a triller, a fantail, a flycatcher and a white-eye, with one more, Samoan Starling, confined to (Western) Samoa and American Samoa (see above). All but the white-eye occur on Upolu where White Terns, White-tailed Tropicbirds and Brown Noddies grace the skies and other landbirds include Blue-crowned Lorikeet, Pacific Imperial Pigeon, Many-coloured Fruit Dove, Cardinal Myzomela, Wattled Honeyeater, Pacific Robin, Polynesian Starling and Red-headed Parrotfinch. Several endemics can be seen at the botanical gardens and in Mount Vaea Scenic Reserve where Robert Louis Stevenson, author of Treasure Island, is buried. To see the rare white-eye it is necessary to hike high up Mount Silisili from the village of A'opo on the island of Savai'i. All of the other endemics occur here too. Seawatching may produce Grey-backed (Spectacled) Tern, as well as Red-footed Booby, Great Frigatebird and Black-naped Tern. The best time to look for the endemics is July to September. 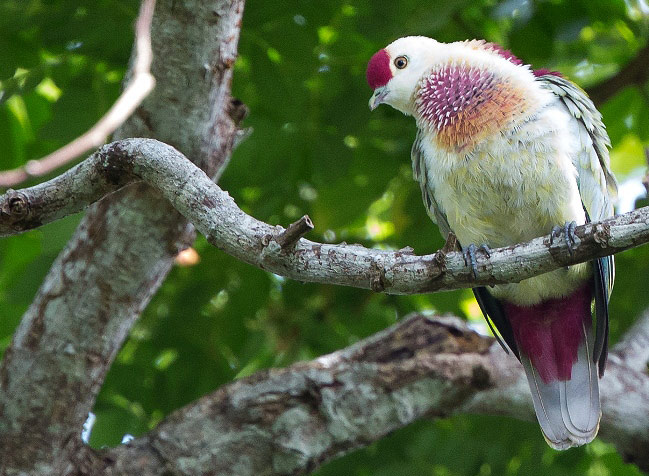 The pretty Many-coloured Fruit Dove can be seen on Samoa, Tonga and Fiji. Image by Simon Colenutt.

Solomon Islands
There are more restricted-range bird species, that is species with ranges of less than 50,000 square kilometres, in the Solomon Islands than anywhere else on Earth. The number of endemics varies according to taxonomist but there are probably at least 80 and potentially lots more due to the presence of many subspecies, as well as at least 20 species which otherwise occur only on other islands in Melanesia. To stand a chance of seeing all the endemics visitors will need to take many internal flights and be prepared to sail several times in order to visit Guadalcanal (where the capital Honiara is situated and there are 2+ island endemics including Guadacanal Moustached Kingfisher, the first male of which was controversially 'collected' in 2015), Rennell (5+ island endemics including a shrikebill), Makira (12+), Malaita (3+), Santa Isabel (several endemics shared with Bougainville, including Fearful Owl, Solomons Frogmouth and Black-faced Pitta (all recently recorded near the village of Tirotonga, the single known site for the pitta), Kolombangara (2+ including the flightless Roviana Rail), Gizo (1+), Ranongga (1+), Vella Lavella (1+) and, in the Santa Cruz Islands at the southeastern end of the long archipelago, Nendo (1+) and Vanikolo (1+). Then there is Bougainville (4+ including the rarely reported Bougainville Moustached Kingfisher) at the northern end to consider, although this is politically part of Papua New Guinea. The endemics also include Sanford's Sea Eagle, Ducorp's Cockatoo, Ultramarine Kingfisher and several honeyeaters, myzomelas, fantails, monarchs, white-eyes and starlings, while there is also a good chance of seeing Heinroth's Shearwater, a rare near-endemic. As well as birds, the Arnavon Islands to the northwest of Santa Isabel support one of the most important rookeries in the west Pacific for Hawksbill Turtle and coral reefs surrounding many smaller islands are rich in marine life. The best time to look for birds is July to September. 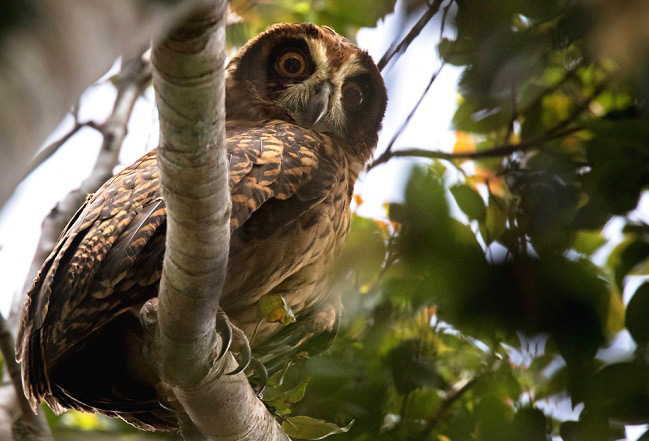 The mythical Fearful Owl on the island of Santa Isabel by Lars Petersson.

Tonga
Tonga is one of the few places in the world where it is possible to swim with Humpback Whales. Several operators run carefully organized tours within the Vava'u Islands when the whales are usually present from mid-July to late October, during the dry season. The endemic bird Tongan Whistler occurs only in the same island group, on A'a, 'Euakafa, Kapa, Pangaimotu, ‘Utungake and 'Uta Vava'u, as well as on the island of Late in northern Tonga. To see the other endemic bird, Tongan Megapode, it is necessary to fly to the northernmost island of all, Nuiafo'ou, where the birds can be seen at communal nesting grounds. Neither of the two endemic birds occur on the main island, Tongatapu, but birds such as Many-coloured Fruit Dove, Wattled Honeyeater, Polynesian Triller and Polynesian Starling can be seen in and near the capital Nuku'alofa. From the main island it is possible to travel by ferry to the island of 'Eua where seabirds such as White-tailed Tropicbirds, White Terns and Grey Noddies nest. The best time to look for birds is July to September. 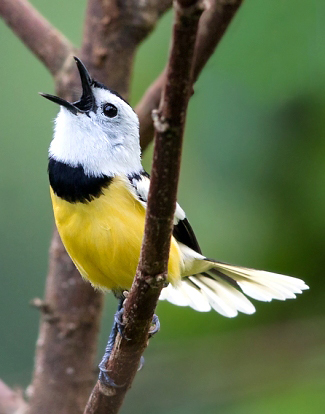 The Buff-bellied Monarch, endemic to Vanuatu, looks much better than it sounds as this superb image by Dubi Shapiro illustrates.

Vanuatu
The island of Efate is the gateway to Vanuatu but the island where all of the endemic bird species occur is Espiritu Santo. There are at least ten endemics but only five are relatively easy to see; Vanuatu Megapode/Scrubfowl (especially at Palikulo Point but also in Loru Conservation Area), Tanna Fruit Dove, Chestnut-bellied Kingfisher (a difficult forest skulker), Buff-bellied Monarch (a hyperactive forest skulker and sole member of its genus) and Yellow-fronted (Vanuatu) White-eye, all of which occur in the lowland forests along with the likes of Mackinlay's Cuckoo Dove, Red-bellied Fruit Dove, Pacific Imperial Pigeon, the juliae subspecies of Collared Kingfisher, Cardinal Myzomela, Long-tailed Triller, Melanesian (Golden) Whistler and Southern Shrikebill. At the slightly higher elevation reached via the Butmas Track the endemic Baker's Imperial Pigeon and Vanuatu Honeyeater become possible, but visitors must mount a mini-expedition with porters and camping equipment to much higher forest to try and see the endemic Santo (Guadalcanal) Thicketbird, as well as Palm Lorikeet, Santa Cruz Ground Dove and Rusty-winged Starling, all of which occur only in Vanuatu and the Santa Cruz Islands of the Solomon Islands. The other endemics are Mountain (Santo) Starling which is confined to the highest forests of Espiritu Santo and Royal (Red-headed) Parrotfinch which is rare and/or nomadic on Santo but apparently more numerous on the islands of Emae and Tongoa. Two other rare birds are Magnificent (Collared) and Vanuatu (White-necked) Petrels, although it is possible to see both at sea around Mota Lava and Vanua Lava in the Banks Islands. The coral reefs around the low-lying Maskelyne Islands are some of the best for scuba-diving and snorkelling and Mt Yasur, an active volcano on Tanna Island, is yet another natural wonder. The best time to look for the endemic birds is July to September.

West Papua - Indonesia
Fantastic birds-of-paradise including Wilson's, and the richest coral reefs in the world! 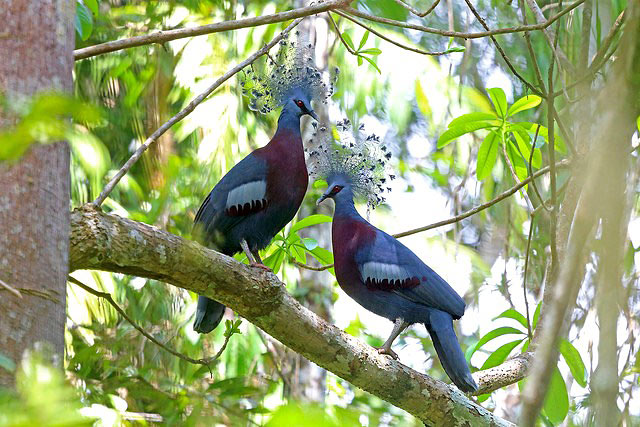 New Guinea is not all about birds-of-paradise. The numerous other spectacular endemics include three species of huge crowned-pigeons including Victoria Crowned-Pigeon which inhabits the northern lowlands where this fantastic image was captured by Nigel Voaden at Nimbokrang in West Papua.