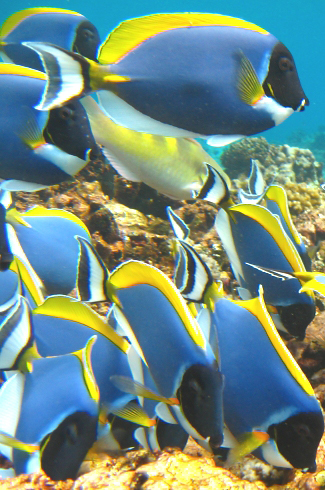 Fabulous Powder-blue Surgeonfish occur on many coral reefs around the world. These were photographed in the Seychelles by Marie-France Grenouillet.

The destinations listed and linked below are the ones we believe are the best in the world for shallow water coral reefs.

Bahamas
One of the best places in the world to swim with dolphins, as well as sharks, Sting Rays and many more fish.

Belize
500 fish species on a 300 km long barrier reef, the second longest in the world, with cayes, small islands surrounded by reefs.

Borneo
Superb reefs especially around the islands of Lankayan, Mabul and Sipadan, and the atoll of Layang Layang help make this A Top Ten Destination.

Christmas Island
The tiny island famous for its Red Crabs is surrounded by a fringing reef.

Cuba
Thousands of cays and lots of colourful fish.

Fiji
Quintessential tropical islands with about 1000 fish species living around them.

Kenya
The wildlife below the Indian Ocean is as spectacular as the wildlife on land hence this is the best overall wildlife experience in the world and therefore A Top Ten Destination.

Komodo - Indonesia
Over a thousand fish species in a large 'protected' area.

Malaysia - Malay Peninsula
Some of the best coral reefs in the region.

Maldives
Hundreds of coral atolls and hundreds of fish species including Whale Sharks and Manta Rays.

Mexico - Southern (Yucatan)
One of the best places in the world to swim with Whale Sharks.

New Caledonia
Arguably the largest and most beautiful coral lagoon in the world, inside a 1600 km long barrier reef, where about 2000 fish species live.

Oman
One of the best areas in the Middle East, renowned for big fishlike groupers.

Palau and Yap - Micronesia
One of the best places in the world to snorkel or scuba-dive with Manta Rays.

Papua New Guinea
Some of the richest coral reefs in the world, with 900 fish species around Walindi Dive Resort on New Britain for example.

Philippines
Numerous islands with adjacent reefs, pristine in places and alive with coral and fish.

Polynesia
Island paradises completed by the fantasy fish living around them.

Seychelles
Numerous fish species around the coral islands such as Bird and Denis.

Sulawesi and Halmahera - Indonesia
Some of the richest and most pristine coral reefs in the world lie to the east, at places such as Bunaken Marine Park and the Lembeh Strait.

Tanzania - Northern
The sea life around the islands of Zanzibar, Pemba and Mafia together with the greatest diversity and numbers of large mammals on Earth help make this A Top Ten Destination.

Thailand - Southern
Many top sites including the Similan Islands, regarded as one of the top scuba-diving destinations in the world.

West Papua - Indonesia
The islands of the Raja Ampat Archipelago, including Batanta, Salawati and Waigeo, where Wilson's Bird-of-paradise lives, lie in an area with the greatest concentration of marine life in the world, with over 1300 fish species, twice as many as there are in the Red Sea and the Caribbean.